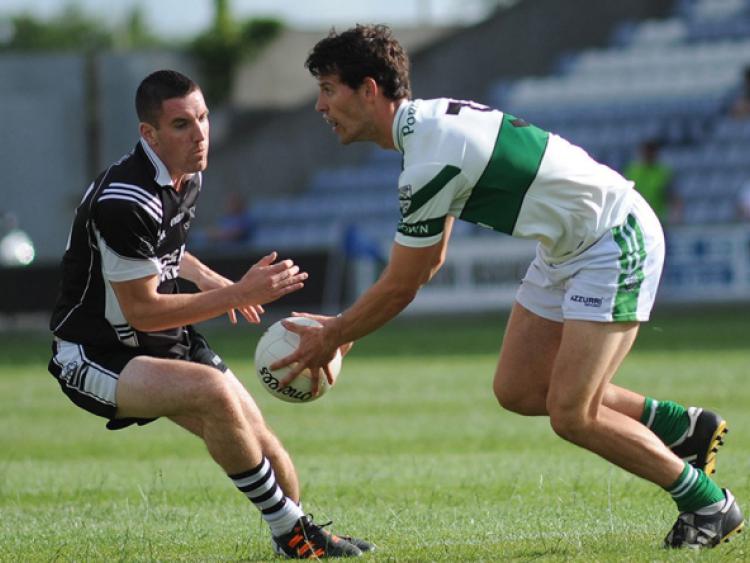 Arles Killeen’s table topping league credentials were underlined on Sunday evening as they battled to a deserved win over Portlaoise in O’Moore Park.

Arles Killeen’s table topping league credentials were underlined on Sunday evening as they battled to a deserved win over Portlaoise in O’Moore Park.

Killeen had only lost a single game en route to this league semi-final, and they snatched the win in dramatic fashion with two late goals from Sean O’Shea and Jason Enright

The men from Arles started brightly and scores from Paul Kingston and Enright opened up an early two point lead. Portlaoise took that extra few minutes to get going but they were soon in front when Craig Rogers applied a neat finish to nice move sending a low shot under Mick Leigh for the game’s opening goal.

It was nip and tuck for the rest of the half with the sides exchanging the lead on three occasions, and so it was perhaps a fair reflection on an evenly-matched first half when they retreated to the dressing rooms at the break all square on a 0-7 to 1-4 scoreline.

Killeen took the lead immediately after the break through Donie Brennan’s neat point but two poor wides let Portlaoise off the hook and they struck in typically clinical fashion to string off the next four points. It looked like Portlaoise were going to saunter into the final at that stage but a Donie Kingston free reduced the deficit to two points with fifteen minutes to go to suggest that the outcome was far from decided.

The stage was set for a thrilling last quarter and Killeen stepped up to the mark to fire two goals in the last fifteen to set up their final date with Graiguecullen. The first was from a move started by yet another interception from the excellent Brian Kennedy and ended when Sean O’Shea gathered Brian McDonald’s incisive hand-pass before burying a shot past Michael Nolan.

Portlaoise were the ones playing catch up now but they quickly restored parity when Craig Rogers capitalised on a silly foul to tap over the equalising point with ten left. After a couple of scrappy wides, the turning point came when referee Maurice Deegan excellently spotted a foul on McDonald as he challenged for a high ball into the box and Jason Enright smashed home the penalty.

Deegan’s busy finish to the game continued when he had to dismiss Mick Leigh after the Killeen keeper tripped Ricky Maher in a scoring position late on and despite having no recognised keeper, the Arles Killeen defence stood strong to tip Craig Rogers’ 21-yard goal effort over the bar and ensure their place in the final.