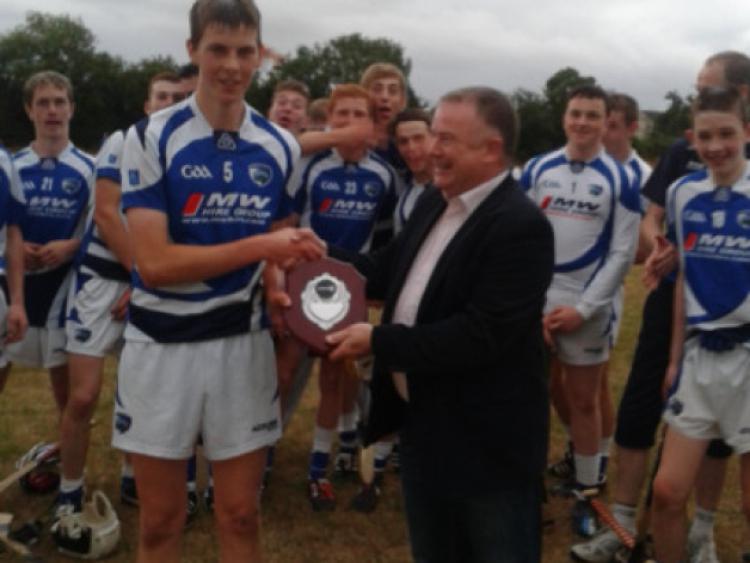 The feel good factor for Laois hurling continues to ruse after the Laois U-16 hurlers completed a successful week when they won the Leinster Shield final in Carlow on Wednesday evening with a comprehensive nine point victory over Offaly, having lost narrowly to Wexford in the semi-final proper.

The feel good factor for Laois hurling continues to ruse after the Laois U-16 hurlers completed a successful week when they won the Leinster Shield final in Carlow on Wednesday evening with a comprehensive nine point victory over Offaly, having lost narrowly to Wexford in the semi-final proper.

The previous Saturday the Laois development squad had won the Leinster blitz held in Banagher against Westmeath, Wexford’s second string and Offaly. Dublin and Wexford A had won out their groups and Offaly finished second to Laois with all four teams qualifying for the semi-finals on the Wednesday evening.

Laois were forced to line out without their minor players Liam O’Connell, Conor Phelan, Mark Kavanagh and the injured Andrew Mortimor, so their displays in the finals are even more impressive and shows the strength of the squad. In the semi-final they drew Wexford with Offaly playing Dublin in the other.

Martin Phelan opened the scoring for Laois and while Wexford quickly equalised, Phelan added another, Sean Downey pointed from a free and Pat Williams and Oisin Nolan hit magnificent long range points and they led 0-5 to 0-1 nearing the end of the 20 minute half when Wexford struck for a goal against the run of play and added an injury time point to level the game at the break.

John Dwyer gave Laois the lead on the restart but Wexford hit four points on the trot. Laois had what appeared to be a perfectly good goal not given as the ball went inside the post but out through a hole in the side netting but with no umpires the referee’s decision didn’t favour Laois.

The Laois lads threw everything into securing a goal but a Sean Downey point left them a goal short at the finish 1-8 to 0-8. Wexford went on to beat Dublin by a goal in the final while Laois took on neighbours Offaly again in the Shield final.

Laois were five points up in as many minutes against Offaly with Eanna Lyons, Conor Hiney and Martin Phelan all on target, and while Offaly clawed back two superb points by Caolan Murphy and Joe Carroll, Laois had a six point lead at the break, 0-8 to 0-2 The second half saw Laois empty their bench but they still dominated the game and with further points from Eanna Lyons, Sean Downey, Oisin Nolan and Pat Williams they ran out convincing winners.

After the game the Treasurer of the Leinster Council Jim Roche presented the captain for the night Pat Williams with the Leinster Shield for the first time.