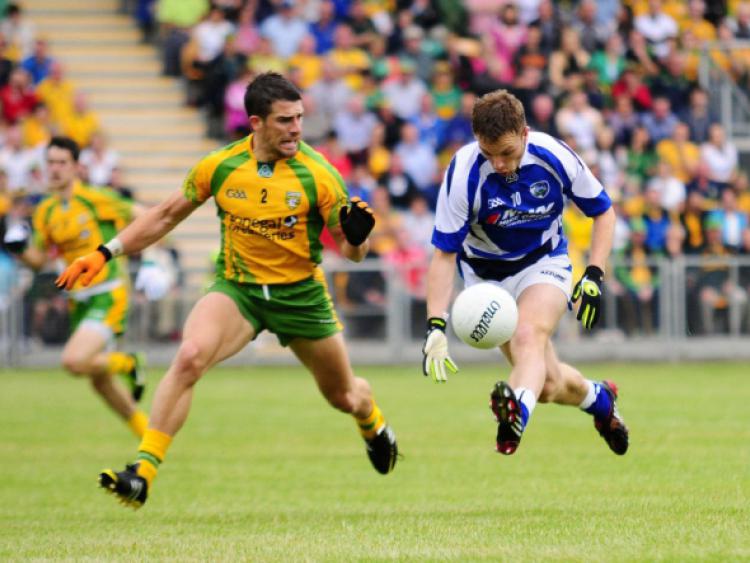 After a resolute and defiant showing, Laois senior footballers exited the All-Ireland Qualifiers after a six point defeat to Donegal in Carrick-on-Shannon on Saturday.

After a resolute and defiant showing, Laois senior footballers exited the All-Ireland Qualifiers after a six point defeat to Donegal in Carrick-on-Shannon on Saturday.

They did so with heads held high too, after pushing Donegal all the way, with four points in the last six minutes adding gloss to a performance which got a result it didn’t deserve.

Laois showed all of their fighting qualities over the 70 minutes, off the field as well as on it, with a first-half pushing match between Justin McNulty and Jimmy McGuinness just one subplot to the days’ events.

As for the game itself, it’s hard to know where to start analyzing things. Laois could have won, but it only looked like they would for a few minutes. Donegal quickly crushed their hopes and ran out six-point winners, a flattering margin.

The game itself shouldn’t have been as interesting as it was. The setup of both teams made for a low-scoring war of attrition, and so it turned out to be. The quality was poor, dreadful at times even, but at the same time, you couldn’t take your eyes off it. It was compelling to watch, but unfortunately it had no happy ending.

When you look back on the game, there were numerous ‘if only’ moments. Mark Timmons’ goal chance in the first half; Kieran Lillis’ speculative shot that almost caught out Paul Durcan; the three times Padraig McMahon got himself free in front of the Donegal goal and was never found. If only.

Laois were competitive with the reigning All-Ireland champions, which is probably more than most expected ahead of the game. It was a six point defeat but a moral victory, although neither are much good. Attentions will eventually turn to next year and what can be achieved, but it remains to be seen who will be spearheading that assault.

Justin McNulty refused to be drawn on his future after the game, and after three mixed years, it remains to be seen if he will be given a fourth. In his time Laois have been promoted, relegated, suffered two first round defeats in Leinster and made it to an All-Ireland quarter-final. If he does not retain his position, the next manager may be tasked to finally bring some consistency.

Laois have made forward strides under McNulty, most plainly in strength and conditioning, as they are now without peers at intercounty level in that regard. For those that hung around, they showed that they are not short of spirit either, but the still need to improve if they are to beat teams like Donegal and their ilk.

The first half couldn’t be said to have started with a bang. Throw in was delayed by over 20 minutes, and neother side seemed to cope with the time change. The game’s first score didn’t come until the 11th minute, with Colm McFadden pointing a free.

Laois first point, and their only in the first half, came from Ross Munnelly’s right foot after 17 minutes. Their best goal chance of the game arrive three minutes later, when John O’Loughlin broke the ball down for Mark Timmons, but he dragged his shot wide.

A disputed point from David Walsh put Donegal back in front, and they added three more before half time, as Laois struggled to get any joy out of playing just one man in the full-forward line.

The start of the second half was much more encouraging, as Padraig McMahon setup Conor Meredith for a point from 21 yards out. Donegal responded with two points in as many minutes, from Michael Murphy and Colm McFadden.

Ross Munnelly hit a brace soon after as both teams began to trade points, and midway through the half Donegal looked comfortable with a 0-10 to 0-5 lead.

Then, slowly but surely, Laois started to eat into the lead. Donie Kingston pointed from distance and a delightful John O’Loughlin pass setup David Conway for another. When Ross Munnelly pointed a free, it had Laois within two and Donegal were rattled. A minute after Munnelly’s effort Kieran Lillis came up from the back, and his speculative effort for a point dropped just short, and almost dropped to the net as Paul Durcan fumbled it. Darren Strong then had an effort off target, and Donegal punished them after that.

The excellent McFadden pointed under pressure and the All-Ireland champions added three more before the final whistle, as Laois’ challenge fizzled out when Conor Meredith was given a straight red card for a foul on Rory Kavanagh.