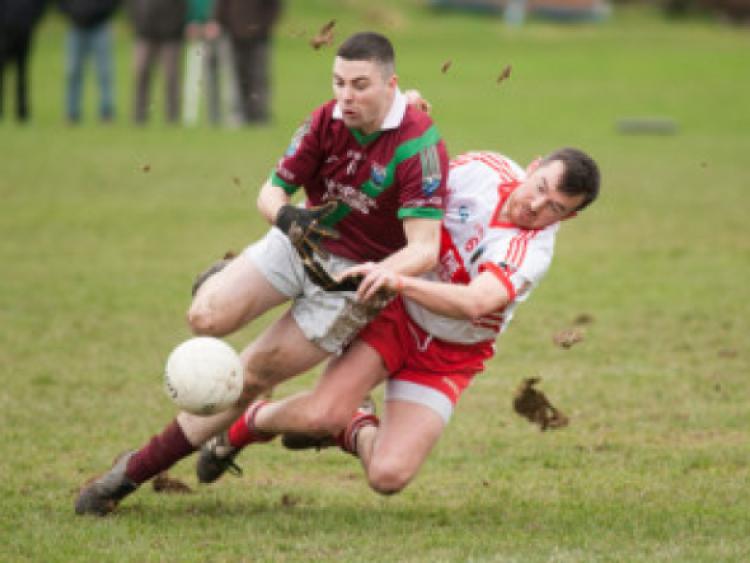 Emo kick-started their 2014 season with a deserved win on home soil when they overcame Portarlington with six points to spare on Sunday afternoon.

Emo kick-started their 2014 season with a deserved win on home soil when they overcame Portarlington with six points to spare on Sunday afternoon.

Emo opened the scoring with just a minute on the clock with Paul Lawlor expertly timing his dummy before splitting the posts for his first of the day. Emo built on their early lead with Chris Gleeson following up a minute later. Portarlington responded well with centre-forward, Kevin McGrath, hitting a quick-fire brace of points to level the game with six minutes played.

With ten minutes elapsed Emo grabbed an inevitable goal through Paul Lawlor as the experienced poacher maintained his composure to calmly slot the ball past Gary Lanigan in the Portarlington goals.

Two minutes later, referee Maurice Deegan issued the first of what would be three black cards in the game, with the first going to Portarlington’s Dean Foster, who was replaced by Eoin McCann.

Shane and Nigel Murphy slotted points for Emo, but Portarlington replied almost instantly with points from Eoin McCann and Chris Booth as Emo held a one-goal lead with ten minutes left in the half. Paul Lawlor landed a brace late on in the half, but Portarlington still found time to pull one back through Jake Foster to leave the scoreline at 1-6 to 0-5 in favour of Emo.

Emo restarted the game well with four early points through Shane Murphy (3) and Paul Lawlor, while Paddy O’Sullivan hit the target for Portarlington in an intense opening ten minutes to the half.

Kevin McGrath and Colm Murphy raised the white flag for Portarlington, before Shane Murphy maintained Emo’s six-point cushion with his fifth point of the day approaching the final ten minutes.

The teams exchanged three late points apiece with Paul Lawlor on target for Emo’s three to bring his tally to 1-7 for the day, while Paddy O’Sullivan, Kevin McGrath and Jake Foster all hit the target for Portarlington as Emo ran out six point victors to progress in the Kelly Cup.