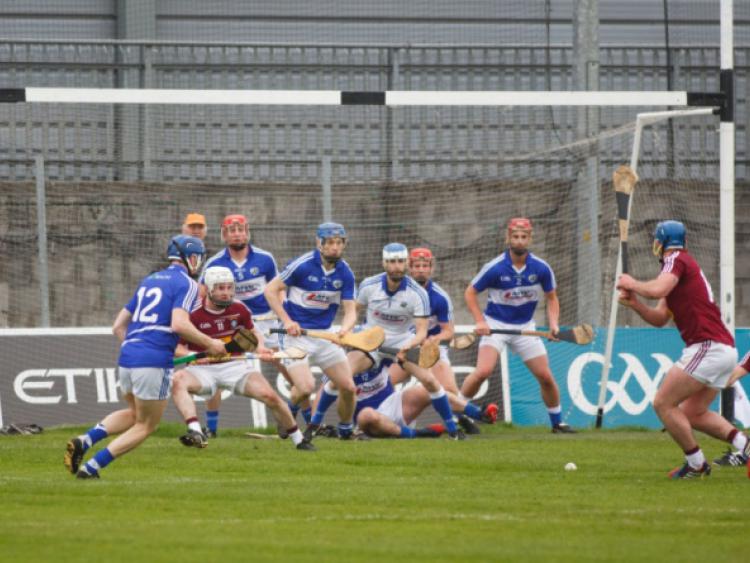 It wasn’t pretty, and it wasn’t Laois at their best, but Cheddar Plunkett’s men got the win they needed to open their Leinster Round Robin series on the right note.

It wasn’t pretty, and it wasn’t Laois at their best, but Cheddar Plunkett’s men got the win they needed to open their Leinster Round Robin series on the right note.

Hurling Leinster Round Robin Series Round 2

They struggled to impose themselves on the game for long spells, and it was only in the last 15 minutes that they stamped their authority on the game.

In the 55 minutes prior to that, however, Laois were far from their best. We had become accustomed to seeing them play a high-tempo game throughout the league, but they were slow in comparison here.

Whereas in the league they were more precise and measured, they were loose here, with the most notable drop in performances seen in their passing and shooting. Laois hit 15 wides, many of the shots taken from too far out as they struggled for penetration against an energetic Westmeath defence.

In spite of Laois’ shortcomings on the day, they still won by six points, and Seamas Plunkett said afterwards that he was delighted that his side managed to win despite being below par.

The first half was as poor as you could expect it to be, with scores rare and quality hurling even rarer. The openign score didn’t come until the sixth minute, with Robbie Greville winning a puck out and racing clear to point from 45 yards.

It drew a quick response from Laois, with Stephen Maher slotting over a free after he was hit late trying to deliver a ball into the forward line. They would be the only scores of the opening ten minutes, as neither side displayed anything close to a killer touch. Shots rained in from all angles and distances, but it made little difference, with the umpires rarely troubled to raise a flag.

Laois took the lead for the first time when Matthew Whelan landed a long range free in the 12th minute, but the crowd would have to wait to be treated to another score. Nine minutes of a wait in total, as Westmeath finally got their second point with another effort from Robbie Greville.

That seemed to stir something in the teams, and the scores started to come somewhat regularly after that. Ross King pointed from a tricky angle after being set up by Dwane Palmer, but Ciaran Curley quickly cancelled that out with a fine score from distance.

Laois tried to kickstart their challenge by making a change, as Cha Dwyer was introduced for John Purcell. It didn’t take the Ballinakill man long to make an impact, as he scored the point of the half with an effort off his hurl from near the left sideline.

Again, though, Laois couldn’t kick on. Niall O’Brien fielded a long ball forward and made space for himself 35 yards out before floating it over the bar. Another exchange of points kept the teams level heading into injury time, when Westmeath got a fortuitous goal.

Derek McNicholas launched a free from midfield into the penalty area, and it seemed to deflect off a Laois player before just going over the line. It almost got worse for Laois moments later when Noel Conaty had a shot for goal from 21 yards, but Brian Stapleton managed to block the shot. Unfortunately for Stapleton, he took a blow to the head, and was forced off at half time.

Laois trailed 1-5 to 0-5 at the break, but made a promising start to the second half when Stephen Maher pointed a free from the right wing to get within two.

Westmeath cancelled that out five minutes later, as Laois’ lacklustre performance in front of goal showed no signs of letting up.

Both teams managed just one more point apiece over the next ten minutes, before a wonderful catch from Neil Foyle 35 yards out allowed him to put Stephen Maher through on goal, and he shot low to Peter Collins’ left for a crucial goal.

A beatifully worked move between Cha Dwyer and Tommy Fitzgerald saw the latter point from out near the right sideline. Stephen Maher added another free moments before Westmeath found a reply, from Robbie Greville, but another point from Maher and Hyland’s fourth of the day gave Laois a five point lead.

It was only then that Laois started to look comfortable, and they managed to add another point to the deficit as they claimed a six point lead at the final whistle.