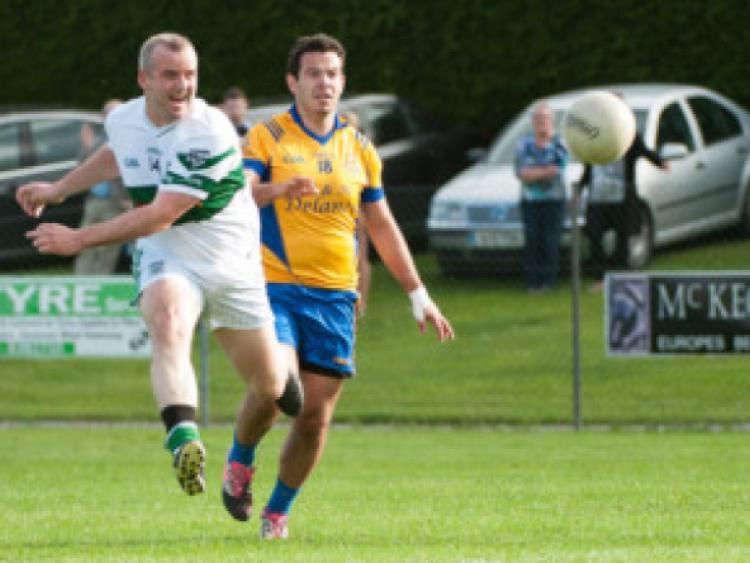 Byrne, a Leinster SFC winner with Laois back in 2003 as a full-back, did his damage at the other end of the field, scoring 1-6 from full-forward.

St Joseph’s just couldn’t handle him, with 1-3 of his tally coming from play, and at one stage in the second half, an exasperated St Joseph’s defender rugby-tackled him to the ground in a bid to stop him.

St Joseph’s had lead by a point at half time, 0-8 to 1-4, but managed just one point in the second half as Portlaoise made a couple of changes which helped them get the upper hand.

For most of the first half it looked like it was going to be an evenly matched game, as Byrne dominated at one end, and James Walsh did likewise at the other, with Walsh scoing four points from play in the opening 30 minutes.

Walsh had opened the scoring with a fine point from out on the left wing, with the impressive Dylan Doyle adding another for St Joseph’s moment later.

Portlaoise opened their account through Conor Dunphy, but Walsh quickly restored St Joseph’s two point lead. Another point apiece for each side kept St Joseph’s in front, but Portlaoise then took the lead thanks to Byrne’s goal. He did well to finish too, racing in from the left wing and being pushed in the back as he shot, but he kept his shot on target.

He then added a point soon after, but St Joseph’s responded well after that. They hit the next three points, from Tommy Knowles, Willie McDonald and James Walsh to edge ahead. Both sides managed one more point each before half time, and that left St Joseph’s with their noses in front at the break.

It took seven minutes for a score to come in the second half, and it was an important one at that, with Scott Lawless firing to the net. Michael Byrne hit back for St Joseph’s, but it was all Portlaoise after that.

Colm Byrne added three points, and two from Scott Lawless, saw them home safely in the end, as St Joseph’s just ran out of steam to allow Portlaoise ease to the win.