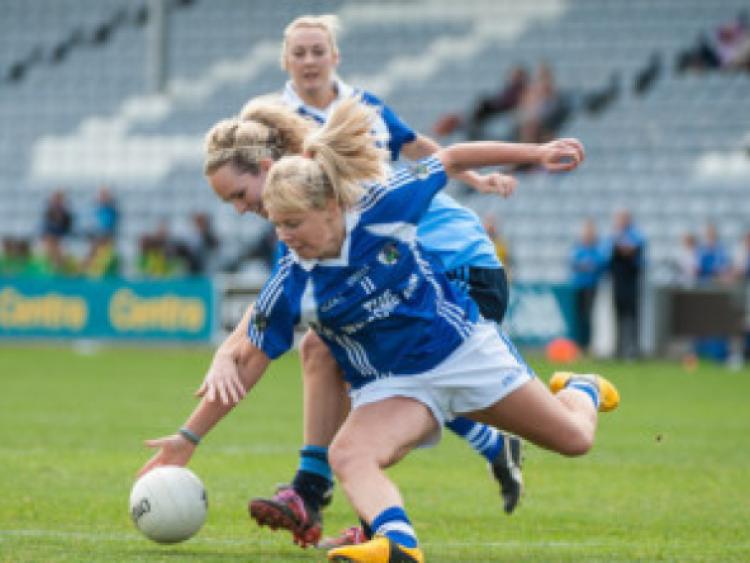 Laois senior ladies saw their dreams of a first Leinster final win since 2011 dashed on Sunday afternoon by a powerful Dublin side in O’ Moore Park.

Laois senior ladies saw their dreams of a first Leinster final win since 2011 dashed on Sunday afternoon by a powerful Dublin side in O’ Moore Park.

Dublin went into the game as the reigning Leinster champions seeking three-in-a-row and it is clear from their performance that it will take a huge effort to stop them advancing to the All-Ireland finals later this year.

Laois could have no complaints at the final whistle. They were simply outclassed in all positions on the pitch and Dublin were stronger, fitter and faster throughout the field.

Dublin had the dream start to the game with two goals in four minutes from corner forwards Lyndsay Peat and Player of the Match Lyndsay Davey. Another goal and point from Peat, along with points from Sinéad Aherne put Dublin 3-4 ahead before Tracy Lawlor converted a free for Laois’ first score in the 18th minute.

Dublin are renowned for their full-forward line and Laois failed to combat the diagonal ball kicked in by Dublin’s wing backs and midfielders into the dangerous trio of Peat, Aherne and Davey. Both of Dublin’s opening goals came when their forwards splitting the Laois defence at a diagonal angle before slotting the ball past Ciamh Dollard. Fiona Dooley impressed for Laois in the opening half making some great blocks and distributing the ball well.

Laois could be criticised for over carrying the ball at times rather than kicking in direct ball to their own forwards as Dublin did. Laois lost a total nine possessions in their own half because of over carrying in the first half and this was punished by Dublin who tallied 5-9 with Noelle Healy and Carla Burke finding the net for the visitors.

Despite conceeding five goals, Ciamh Dollard produced some terrific saves in the first half and Laois were lucky to not be trailing by more. The half time score was 5-9 to 0-2 with both of Laois scores coming from Tracy Lawlorf.

Laois needed a strong second half performance but the pace and support play of Dublin made it difficult for them to gain any foothold in the game. Ciamh Dollard proved why she was awarded goalkeeper of the Division 1 League in the fourth minute with a terrific save, stretching to reach the top right hand corner and clearing the ball up the field.

Laois created more opportunities in the second half but failed to finish. Laura-Marie Maher continuously attacked and ran at the Dublin defence and was awarded a free for her efforts which Tracy Lawlor converted, leaving the score at 5-13 to 003 with 38 minutes played.

The introduction of Meaghan Dunne in the forwards for Laois made a difference and they created more chances using direct ball and supporting hand passes to split the defence.

Laois forward Aisling Kehoe was unlucky to see her goalbound shot saved by the Dublin ‘keeper and Charlotte Delaney made a great run from the backs to score Laois only point from play with 55 minutes on the clock.

Despite these efforts, Dublin continued to dominate the game and kicked some fine scores from a variety of angles. What impressed most was their support play throughout the pitch and the pace they injected whilst attacking.

Laois now need to regroup and await the qualifiers draw next Sunday to see who they will face next.

Dublin are straight through to the quarter final after a superb performance.