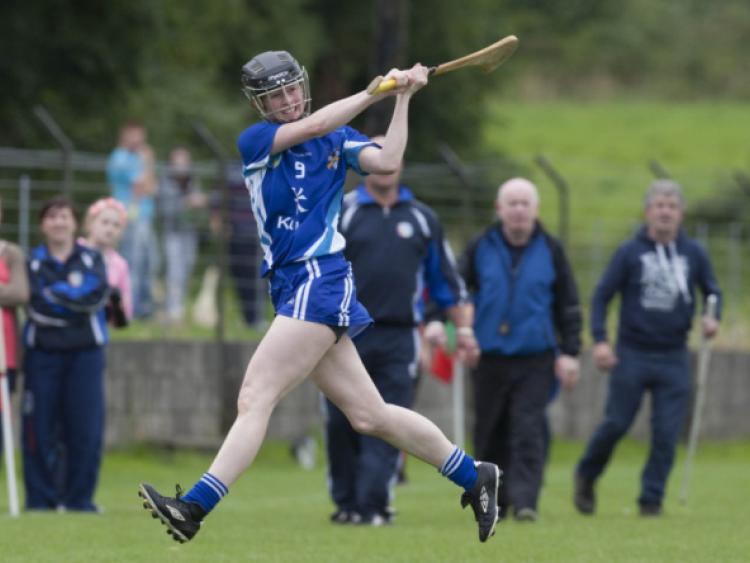 In a highly entertaining and nail biting game in Rathdowney, Laois edged out Down by the smallest of margins with a last gasp effort from captain Sarah Ann Fitzgerald in what was a hugely determined and hearty display by a Laois team full of spirit and fight and a huge sense of togetherness.

In a highly entertaining and nail biting game in Rathdowney, Laois edged out Down by the smallest of margins with a last gasp effort from captain Sarah Ann Fitzgerald in what was a hugely determined and hearty display by a Laois team full of spirit and fight and a huge sense of togetherness.

It was Laois’ ability to gel together as a team and dig in as a team which in truth, probably saw them over the line to give them a crucial win as they look to return to the All Ireland Premier Junior Final this year.

Leinster Junior Champions Laois burst out of the traps with a brilliant individual goal from Niamh Dollard following a good pass into space by Sarah Anne Fitzgerald.

Catherine McGourty responded for Down with a huge point which was tipped just over the crossbar by Laura Dunne in the Laois goal. Louise Mahony pointed a free from close range, before Down’s star player, Niamh Mallon, got the first of her points from play after a nice catch and turn off her left hand side.

Laois were piling on the pressure in the early stages and a long ball in was just deflected out for a 45’, which Fitzgerald duly dispatched. Down got a controversial free and Laois centre back Eimear Delaney was yellow carded for what was adjudged to be a charge on Mallon. Mallon responded by pointing the free and this was immediately followed up by another fine McGourty point from distance.

Laois responded emphatically as they struck for a second early goal. Following a mazy Dollard solo run, she batted her effort straight at the Down keeper, who parried away to Dawn Mortimer. With the coolest of heads, the Camross player collected and passed to Fitzgerald who blasted low to the net.

Laois at this stage held a four point lead but it was reduced quickly following a McGourty 45’ and a lovely point by Karen McMullan after a pass by Sara Louise Carr. Louise Mahony then pointed a free to keep Laois ahead, before Mallon scored another fine individual point.

Louise Mahony won another free and converted in what was Laois’ final score of the half, but this was a period where Down surged back into it. Mallon, who was a thorn in Laois’ side all day, kept the scoreboard ticking over before Down where midfielder Fionnuala Carr passed across to McMullan, who caught and steadied herself to score her second point of the game. Down led by a point at half time having fought back from the concession of two early goals.

The advantage did not last long however as Laois started the second half much like the first with a quick Mortimer goal from a crisp ground strike after a looping pass in from Purcell.

Down responded with a nice score from Aoife Keown and another Mallon point, this time off her right.

Louise Mahony, who was her usual steady source of scores all day tapped over another free, before a scramble in the Laois box saw the ball recycled to Keown again, who popped over to draw the sides level.

Niamh Mallon collected under pressure to edge Down ahead in what was a good spell of dominance for the visitors but Laois held their nerve. Louise Mahony again pointed a free before Fitzgerald got the resulting puck out and drove high over the Down crossbar. It was nip and tuck as Catherine McGourty again stepped up with a 45’ to level once again.

Fitzgerald lifted the Laois team and their supporters with a huge score from play from all of 60 metres which was followed up by a nice Dawn Mortimer point.

However, just when Laois looked to be pulling away, the brilliant Mallon collected in the Laois square and blasted to the net to put Down ahead by one.

It was neck and neck from there to the finish. Sile Burke levelled again following a Dollard pass before Mallon pointed again to keep Down one ahead.

Down had the chance to seal the win but Mallon and McGourty missed two relatively easy close in frees which left Laois in the game.

The home side duly punished Down and following a good Mahony score from play, it looked like it would leave the game as a draw.

That is until Laois won a free right on halfway and captain Fitzgerald produced a monster free worthy of winning any game, at the death to snatch victory for Laois in this enthralling game of camogie.