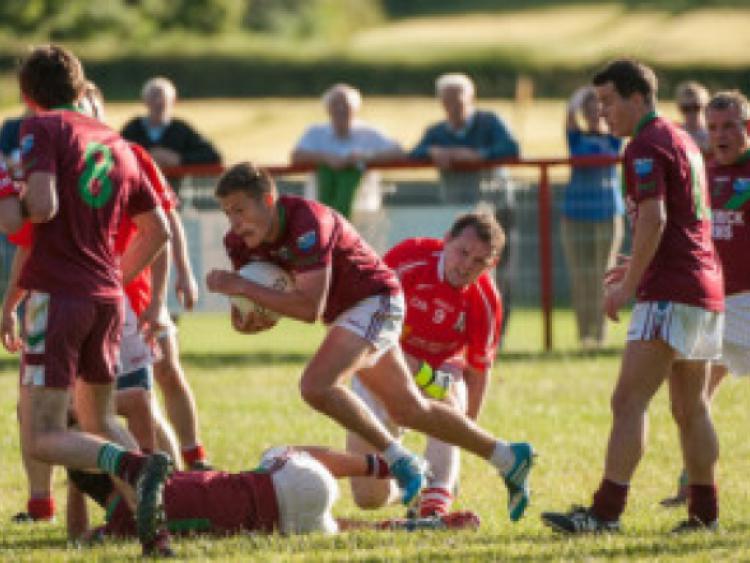 Portarlington survived a second-half comeback from Timahoe to see them crowned Division 4 League champions following a one goal victory in Emo on Sunday evening.

Portarlington survived a second-half comeback from Timahoe to see them crowned Division 4 League champions following a one goal victory in Emo on Sunday evening.

Timahoe were dealt a blow early on with centre-forward, Pa Foyle, being forced off through injury with Brendan Quigley replacing him. Things went from bad to worse for Timahoe as within two minutes of the throw-in Eoin McCann had already rattled the Timahoe net following a superb thirty metre dash through the heart of the defence to open the day’s scoring.

It took until the eight minute for Timahoe to open their account with substitute Brendan Quigley splitting the posts to register their first score of the game, but it was to be their last for almost twenty minutes.

Portarlington went on to pull the strings for the twenty minutes thereafter as they racked up five points without reply through Jake Foster and Joe Sweeney braces, and a single from wing-back Patrick O’Sullivan to see them take a seven point lead.

Timahoe raised the white flag for only the second time in the game after twenty-seven minutes when Quigley again found the target to cut the deficit to six points with three minutes left to play in the half.

But there was still enough time remaining for Portarlington, and Eoin McCann, to rattle the Timahoe net for second time in the game with the midfielder striding through the defence once again before beating Robert Miller in the Timahoe goals to give his side a 2-5 to 0-2 lead at the interval.

Timahoe emerged from their half time team-talk with an air of purpose as they restarted the scoring after just two minutes with half time substitute, and former Laois Ladies manager, Tom McKettrick, making an instant impact to pull one back. Timahoe continued to chip away at the Portarlington lead with Michael Delaney getting on the end of a high ball into the square to lift the green flag to leave five points between the teams.

Robert Piggott (2) and Joe Sweeney traded points with Brendan Quigley and Tom McKettrick to leave six points separating the sides with five minutes remaining, teeing up a Timahoe comeback. Two points in as many minutes from McKettrick cut the deficit to four points, before Arthur Bennett closed the gap to three points - but that was as close as they came as Portarlington ran out deserved victors on the day to collect the silverware.