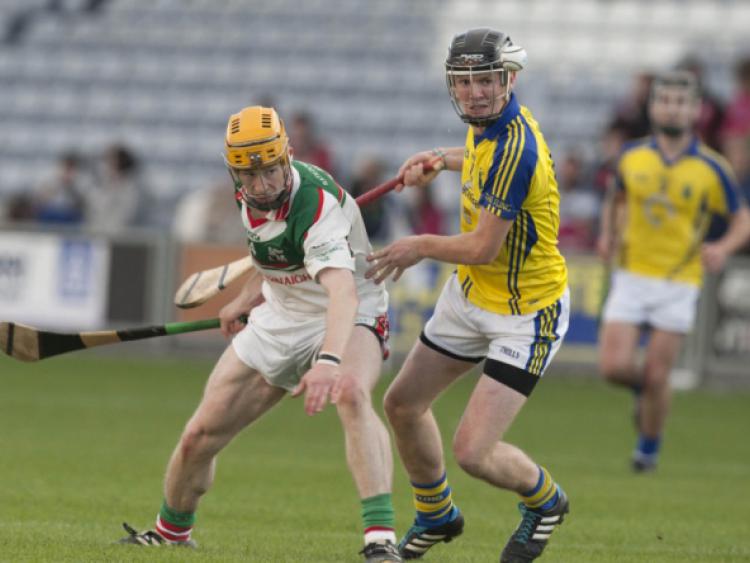 After two hours of outstanding hurling, Rathdowney-Errill eventually overcame the determined challenge of Abbeyleix to reach their fifth county final since 2006.

After two hours of outstanding hurling, Rathdowney-Errill eventually overcame the determined challenge of Abbeyleix to reach their fifth county final since 2006.

In the end it was the greater experience of Rathdowney-Errill and how they tightened up at the back in the second-half that was the difference between the two sides. Despite conceding two goals inside the opening ten minutes, they kept their composure and more importantly kept the scoreboard ticking over with points. When Abbeyleix struck for a third goal after 24 minutes, Rathdowney-Errill hit back with interest with Tadgh Dowling hitting two goals in a minute for an instant momentum swing.

After conceding 3-5 in the opening half, Rathdowney-Errill allowed just five points in the second as they forced Abbeyleix to shoot from more difficult positions which caused eight wides. For their part, Rathdowney-Errill were far more accurate after the interval hitting just two further wides after posting seven in the first 30.

Despite the final margin between the sides, Abbeyleix had the chances to force this game to the wire. Had Ryan Peacock managed to flick a loose ball to the back of the net instead of inches over the bar after 43 minutes, he would have levelled the scores and given his side a major boost. On such small margins can games turn and when Rathdowney-Errill followed up with 1-2, Abbeyleix’ chance was gone.

While they did cut through their opponents defence for three goals, they only managed two points from play over the hour and that was not going to be enough to overcome a free scoring Rathdowney-Errill side.

Rathdowney-Errill have been dependant on Ross King for scores this year but in the opening ten minutes, they had six different scorers for their seven points in response to goals from Joe Bergin and Eoghan Fennelly.

Bergin’s goal came after just 40 seconds after Steven Reilly split the defence with a powerful run while Fennelly reacted quickest to sweep the ball to the back of the net with ten minutes on the clock.

Rathdowney-Errill should have had a goal with just four minutes elapsed but Enda Rowland pulled off an unbelievable save to somehow deflect a powerful, low shot from Ross King over the bar.

After the sides exchanged three points apiece between the 13th and 23rd minute, Abbeyleix jumped back into the lead when Rory McEvoy struck for their third goal.

The momentum was with Abbeyleix at this stage but Rathdowney-Errill responded emphatically with two goals in a minute from Tadgh Dowling. The first came after a surging run from Joe Fitpatrick and he batted home the second from close range after Ross King played the ball across the square.

A brace of points from Eoin Reilly from placed balls got Abbeyleix back within two but Enda Meagher restored a three point lead for Rathdowney-Errill with the final point of the half leaving the score at the break at 2-11 to 3-5.

Scores were much harder to come by in the second-half but Abbeyleix were back within one after 37 minutes thanks to two more Reilly frees.

It took Rathdowney-Errill nine minutes to add to their total but two in quick succession from Darren and Ross King restored their lead to three.

Ryan Peacock came within inches of levelling the scores when he latched on to a loose ball close to the Rathdowney-Errill goal but his instinctive effort went inches over the bar.

With the game in the balance, substitute Damien Bowe took control and after he knocked over two points, he combined with Ross King and lashed the ball to the back of the net to suddenly put seven between the sides.

That score finally seemed to break Abbeyleix’ resolve and Rathdowney-Errill pulled away with points from Ross King (3), Shane Dollard and a second goal from Bowe.

Abbeyleix managed just two points in the closing minutes, both from Reilly frees, but at the final whistle they were deservedly clapped off by their supporters who were rightly proud of their side’s efforts.

For Rathdowney-Errill, the attention switches immediately to next Sunday as they advance to face Camross in what will be an intriguing county final.