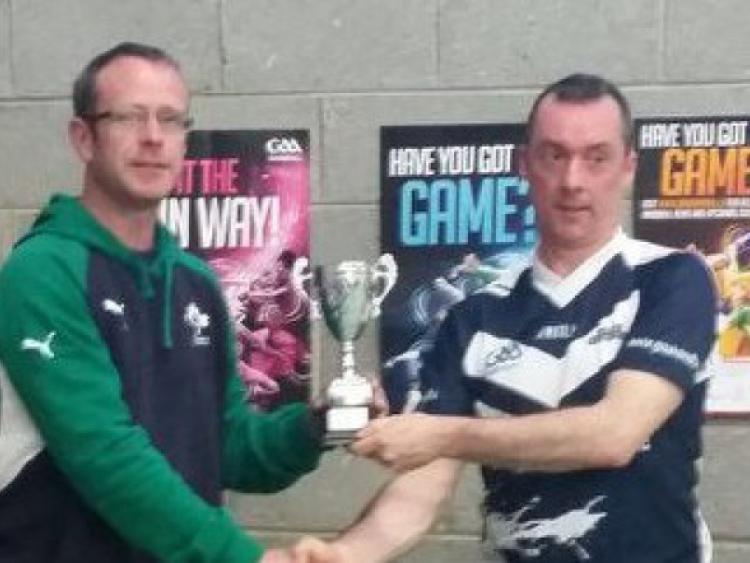 The newly formed Clough Ballacolla Handball Club held the finals of their inaugural one-wall club tournament last weekend with a high standard of handball played across all divisions.

The newly formed Clough Ballacolla Handball Club held the finals of their inaugural one-wall club tournament last weekend with a high standard of handball played across all divisions.

The success of this tournament is clear evidence that the game of handball has a bright future in Clough Ballacolla and that their players will be serious contenders in the Laois One-Wall leagues starting in the coming weeks.

The opening final played was in the Men’s Challenger Division where Jimmy Heneberry faced Ollie Byrne. Jimmy started the final in confident fashion winning the opening game 21-7. The second game was a much closer affair with Ollie upping his game considerable and pushing his opponent all the way. However, Jimmy kept his nerve to take the title by winning the second game on a 21-18 scoreline.

The boys U-14 final pitted Evan Hawkes against Padraig Brennan. In a very competitive final it was Evan who prevailed over two games on a scoreline of 21-11 21-9. Both players displayed great skill levels and if they continue to practice and train hard they will undoubtedly have bright futures in the game.

In the penultimate game of the night, Diarmuid Conway faced Cathal Dunne in the Boy’s U-16 Final. Diarmuid was to prove too strong for Cathal taking the title on a 21-6, 21-14 scoreline. Credit must be given to Cathal as he pushed Diarmuid all the way in the second game and never gave up. Hopefully the two lads will be able to step up in the near future to challenge for honours in the adult grades.

The last final played was in the Men’s Open Division where Kevin Brennan faced Seamus Brennan. In the semi-finals Seamus had defeated Georgie Boyhan while Kevin had overcome the challenge of Willie Dunphy to set up a highly anticipated final between two evenly match competitors.

The first game was to live up to expectations with both players enjoying periods of dominance. A feature of the game was both players’ retrieval skills and ability to kill the ball.

After a titanic struggle it was Kevin who edged the first game 21-17. The second proved a more one-sided affair with Kevin taking control of proceedings and finishing out the game on a 21-8 scoreline to take the inaugural Clough Ballacolla Tournament Title.