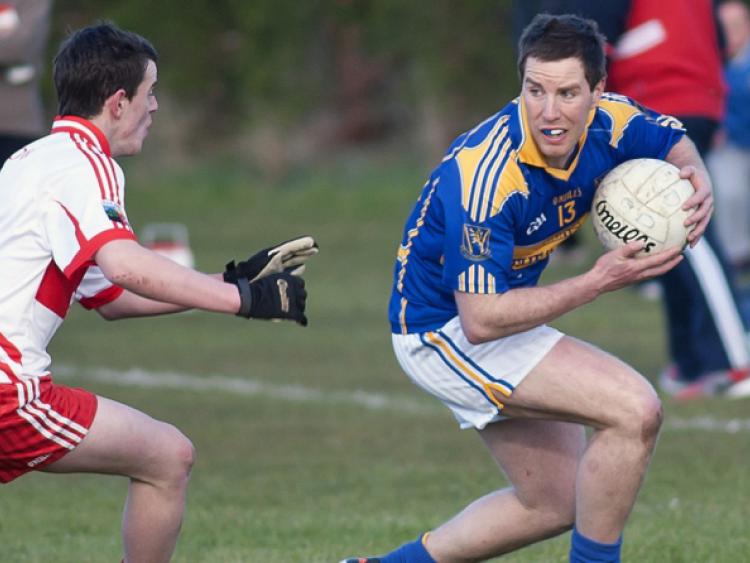 Ballyroan Abbey’s run of three games without defeat came to an end on Sunday evening as they lost out to St Joseph’s in Kellyville.

Ballyroan Abbey’s run of three games without defeat came to an end on Sunday evening as they lost out to St Joseph’s in Kellyville.

After beating Portlaoise and drawing with Stradbally and The Heath, Ballyroan Abbey were steadily climbing up the table on their return to ACFL Division 1 this year, but that run ended with a 2-9 to 1-9 win for St Joseph’s.

A first half penalty had helped the home side into a 1-5 to 0-3 lead at the break, and despite a string of points in the second half from Scott Conroy, and a goal from Alan Burnell, St Joseph’s found the back of the net once again to claim their second win of the year. Elsewhere, Arles-Kilcruise also picked up their second win thanks to a 0-10 to 0-7 victory over The Heath.

With wind advantage in the first half Arles jumped out to a 0-7 to 0-1 lead by half time, leaving The Heath with it all to do. The introduction of Chris Bergin saw the hosts improve in the second half, as he scored three points, but Arles held on for the win.

Elsewhere, Portlaoise got back to winning ways on Saturday night with an emphatic 6-16 to 1-7 win over Crettyard, who remain bottom of the standings.

In the other ACFL Division 1 game played over the weekend, Timahoe lost out by four points against Graiguecullen, 1-10 to 0-9, who now move up to third place with six points from their five games.

Overall, this has been one of the most closely contested ACFL Division 1 campaigns in recent memory. Arles-Killeen are the only side to win all five of their games, but below them, the rest of the teams are tightly bunced together.

Only four points separate second-placed Portlaoise (6) with bottom of the table Crettyard (2).

The next round of games takes place this weekend before a break until early June. On Friday night, Arles-Killeen will put their winning record on the line at home to The Heath, while the rest of the five games take place on Saturday night.

Portlaoise make the trip down to play Graiguecullen, Ballyroan Abbey host O’Dempsey’s, Crettyard welcome Stradbally, Timahoe meet Emo and Arles-Kilcruise entertain O’Dempsey’s. All games are at 7.30pm and intercounty players are not available.