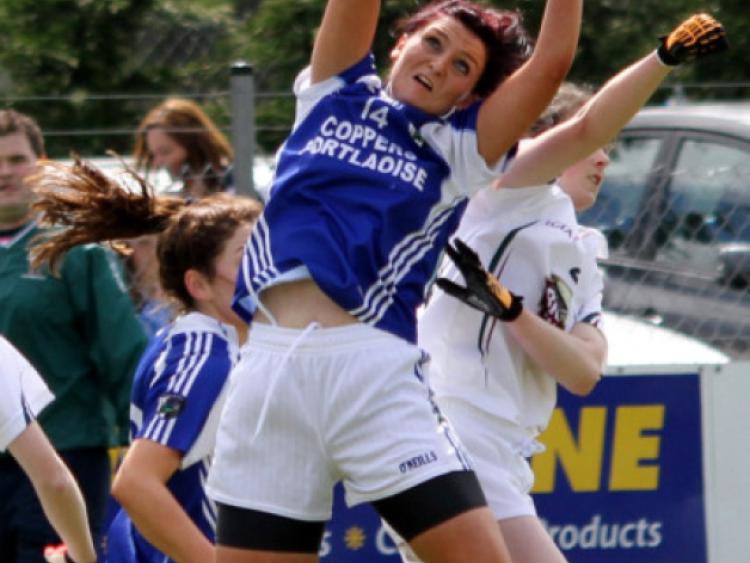 The Laois Minor Ladies Footballers were crowned Leinster ‘B’ Champions thanks to a 4-10 to 1-13 win over Kildare at Conneff Park, Clane on Sunday.

The Laois Minor Ladies Footballers were crowned Leinster ‘B’ Champions thanks to a 4-10 to 1-13 win over Kildare at Conneff Park, Clane on Sunday.

A hat-trick of first half goals helped provide the basis for victory, with Laois leading by 3-4 to 0-8 at the break on their way to provincial silverware.

Kildare claimed the next two points, but good work by Shannon Costelloe and Laura Marie Maher pushed Laois in front. Maher slotted a low side-footed shot to the back of the Kildare net after good work by Ciara Burke in the build-up. Laois came under pressure at the opposite end as Kildare went in search of goals of their own.

Firstly Mikaela Nolan was blocked as she shot with Laois keeper Emma Hooban getting a foot to a Triona Duggan rebound volley with the ball spinning across the goal line and cleared by Kellie Preston. Then a lovely first time punched pass from Ellen Dowling sent Nolan clear 30 yards out and she shot low and hard from the 13 metre line but again Hooban was able to block the shot and Clodagh Dunne scrambled it clear.

Kildare worked hard for scores, with Ellen Dowling and Maher trading points, before Maher shot her second goal after Kildare failed to clear a high lobbing ball from Burke. Kildare finished the half strongly with points from Orla Gowran and Duggan, but Laois led by five points at the break.

The O’Moore’s were wind assisted on the restart, and while McKenna netted for Kildare, Laois upped their game, with some good scores from Burke and Costello. Kildare broke ahead with Gowran, Muireann Scully and Dowling dangerous.

A Laois attack seemed to fade out as Shannon Costello kicked the ball across the goalmouth with nobody to aim for but two Kildare defenders clashed as the ball seemed to be going wide.

However, the ball deflected off Kildare hands into the net. Kildare tried to get back into the game for the next four minutes without any reward, but with the game nearing an end Laois kicked the final four points to confirm silverware.

Emma Hooban, Kellie Preston, Clodagh Dunne and Clare Dollard impressed in the Laois defence, Aine Haberlin did well at midfield while Laura Marie Maher and Shannon Costello were the stars in the O’Moore’s attack with captain Ciara Burke also leading her side impressively.

After the game, Laois captain Ciara Burke from the Sarsfields club accepted the cup on behalf of her team-mates.

Well done to all concerned including the management team of Linda Hooban, Pat O’Sullivan, Declan Delaney and James Kelly, along with physio Niamh O’Loughlin. Laois will now play in the All-Ireland Semi-final in July. A Leinster team has yet to win this competition, with the ‘B’ Championship introduced in 2009 with Clare the reigning champions.