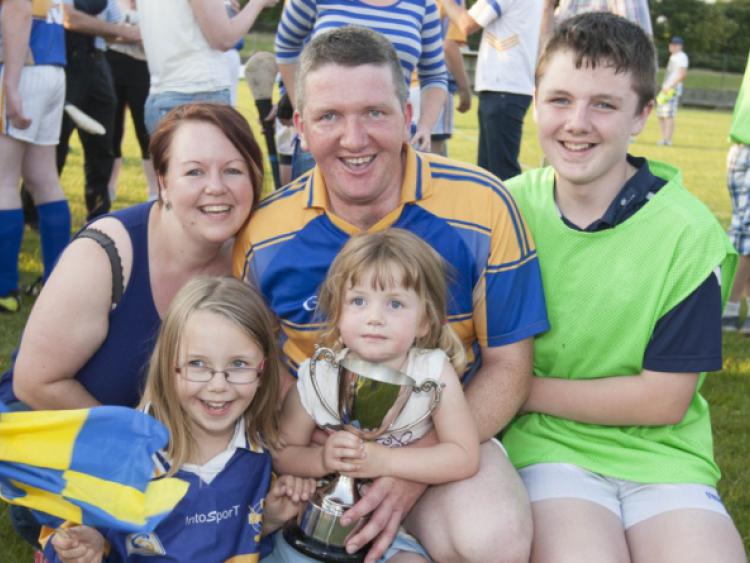 Colt booked their place in Division 1 for 2014 after a fantastic battle with Mountrath last Saturday night in Rathdowney.

Colt booked their place in Division 1 for 2014 after a fantastic battle with Mountrath last Saturday night in Rathdowney.

Played in just about the most perfect conditions you could imagine, both teams served up a hgely exciting game, with two points in the last two minutes finally settling the game in Colt’s favour.

For Mountrath, they will be left kicking themselves as they scoring touch deserted them late in the game, as they scored just one point in the last 12 minutes.

The win here is further success for Colt under John Taylor’s stewardship also, as the Portlaoise man previously lead them to an intermediate championship title.

They got off to a bad start here too, as midfielder Anthony Dunne sustained a serious knee injury less than a minute into the game, and play was held up for some time as a result.

When the sliotar was eventually thrown back in, it was end to end stuff, as Colt took the lead through Colm Kavanagh. Mountrath quickly responded thanks to Colm Lanham and Dan Russell, before a Damien Lanham effort had them 0-3 to 0-1 ahead.

Colt levelled with two points in the space of a minute, and that set the tone for much of what followed before half time. Both teams proved to be very well matched, with Chris Murray effortlessly stroking over points from frees, while Dan Russell was in a similar vein of form at the other end.

It was a purple patch before half time which allowed Colt to seize the initiative as points form Murray, Shane Mullins and Henry Keyes had them 0-11 to 0-8 up at the break.

If they were happy with their first half’s work it was quickly eroded when Mountrath tore into them at the start of the second half.

Dan Russell pointed two frees in the first five minutes, with Paul Meade then adding another to level the game. Seconds later, a scramble in the Colt penalty area ended with the ball just crossing the line, as Colm Lenihan appeared to get the vital touch. Another point put them four up, but they would only get two more points in the remaining 20 minuntes.

Colt ate away at their lead, and eventually drew level thanks to a great score from Dan Dalton. They never looked back after that, with Chris Murray’s injury time point sealing the title.