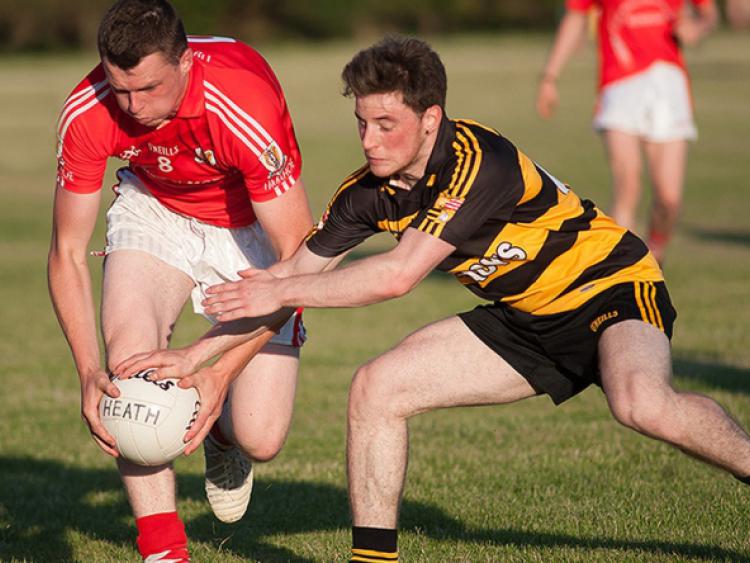 There was plenty of drama to round of the eleventh and final round of the ACFL Division 1, with relegation and semi-final places all going down to the last round of games.

There was plenty of drama to round of the eleventh and final round of the ACFL Division 1, with relegation and semi-final places all going down to the last round of games.

At the top end of the table, before a ball was thrown in last Wednesday night there were three teams assured of places in the semi-finals - Arles-Killeen, Stradbally and Graiguecullen.

There was fierce competition for the fourth spot, with Portlaoise, Emo and St Joseph’s all vying for a knockout place. As it turned out, Portlaoise were assured of the berth without even kicking a ball, as St Joseph’s and Emo both lost on Wednesday, meaning Portlaoise only had to avoid a massive defeat against O’Dempsey’s on Saturday to advance.

As it turned out, they made double sure, as they scored a 4-8 to 1-7 win over the Killenard men, a result which saw them relegated.

O’Dempsey’s had to win in order to avoid dropping back to Division 2, but they just couldn’t hold out Portlaoise. The reigning SFC champions final tally of 4-8 tells much of O’Dempsey’s woes this year, as they couldn’t marry a resolute defence with a free-scoring attack.

O’Dempsey’s were actually the highest scoring team outside of the top four, but they had the second worse defence, with only Ballyroan Abbey conceding more.

They are joined in Division 2 next year by The Heath, who had finished in the bottom two for the last two years, but had avoided relegation due to their second team competing in Division 2.

After a change in the rules, it now means that their second team will be relegated to Division 3 to allow their first team to drop down, a move which actually works in the favour of The Rock, who will now retain their Division 2 status despite finishing in the bottom two.

The semi-finals of the league will now take place on Sunday, July 28, with the meeting of Portlaoise and Arles-Killeen the standout game. Killeen had won ten games in a row before losing their final round clash with Arles-Kilcruise, a result which saved Kilcruise from relegation.

In the other semi-final, second-placed Stradbally will be hoping to do the double over Graiguecullen having beaten them earlier in the league.