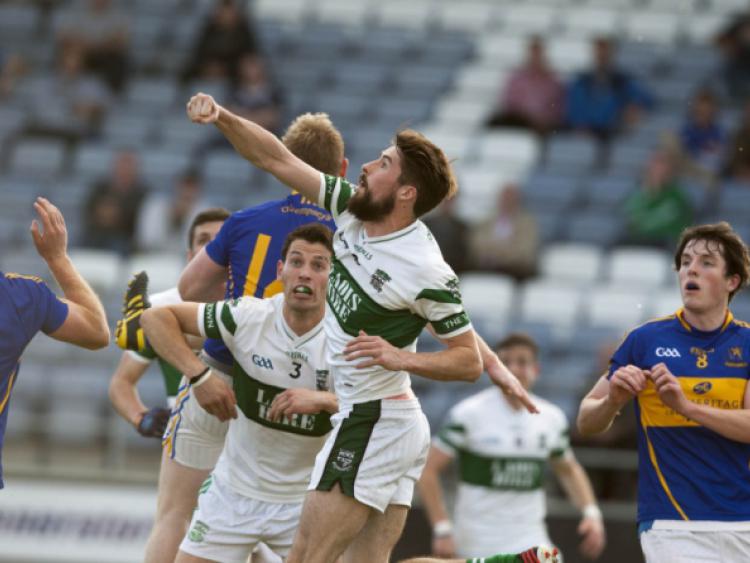 Both teams deserve huge credit for producing a game of high quality. Portlaoise, who haven’t fired on all cylinders to date in this year’s championship, showed signs that they are starting to find form at the right time and ran out four point winners on a scoreline of 1-17 to 1-13.

Craig Rogers got Portlaoise up and running in the first minute with a well taken thirty yard point, and Brian Smith did likewise a minute later to give the reigning champions an early two point lead.

Conor Meredith got O’ Dempsey’s on the score board in the third minute, with both sides fighting to gain the early advantage.

Fresh from his return from the town’s hurlers Barry Fitzgerald pointed from thirty yards a minute later as the tit for tat scoring continued. Bryan Meredith and Brian Nugent hit back-to-back scores for the O’Dempsey’s to leave the side’s level 0-3 each on the ten minute mark.

O’Dempsey’s had Shaun Geoghagan to thank for a fantastic goal saving block a minute later. Geoghegan managed to spread his body to thwart Barry Fitzgerald’s pile driver effort to keep the sides level.

Portlaoise now began to dominate affairs and hit four unanswered scores between the eleventh and twenty first minutes. Craig Rogers, Conor Boyle both pointed before, Paul Cahillane found the back of the O’Dempseys net in the eighteenth minute.

Cahillane showed a deft touch to rise highest to punch a Brian McCormack searching ball to the net. McCormack was on hand to point himself two minutes later to give Portlaoise a 1-6 to 0-3 lead.

O’Dempsey’s, who have been slow to start in all of their games, began to come more and more into the game after that. Conor Meredith pointed after a good run from midfield in the twenty eight minute and he was on hand to crash home a ten yard pile driver to the Portlaoise net a minute later.

The damage was done by a searing defence splitting Peter O’Leary run, whose shot was superbly saved by Mickey Nolan but Meredith followed up and crashed to the net.

A Rory Bracken point further reduced O’Dempseys deficit a minute later to allow his side go the break a point down at 1-6 to 1-7.

Barry Kelly levelled the game a minute into the second half with good individual point. A minute later O’Dempsey’s were awarded a penalty when Brian Mulligan was judged to have brought Stephen O’Leary down inside the large rectangle. O’Leary dusted himself down but was superbly denied by Nolan who batted his effort to safety.

Brian McCormack hit one of his left foot specials to tie the game once again before Paul Cahillane showed a neat turn and dispatch from thirty yards to regain the lead for the champions.

McCormack then flashed over from fifteen yards when it looked like a goal was on. Portlaoise began to turn the screw and hit three unanswered scores, Brian Smith and Barry Fitzgerald registered before a Craig Rodgers pointed free, won by a marauding run and foul on half time sub Cahir Healy.

Barry Kelly slotted over a twenty yard effort in the forty sixth minute to leave a goal between the sides. Peter O’Leary struck over a ‘45 with five left but Portlaoise were always able to keep their noses in front and sub Kevin Fitzpatrick scored the game’s final score on the sixty minute mark to see his side over the line on a scoreline of 1-17 to 1-13.

It’s on to the semi-finals now for Portlaoise, where they will meet their long-time rivals Arles-Kilcruise for a place in yet another county final.