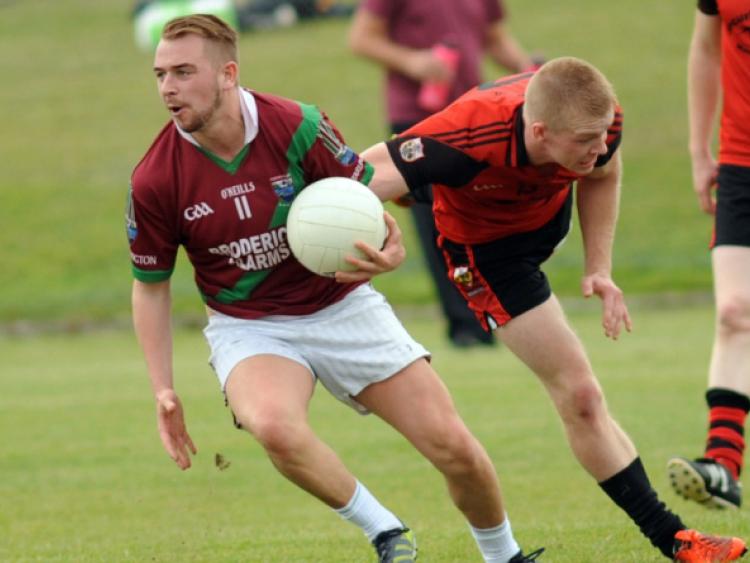 For the first ten minutes of this game, The Rock looked the better team as they opened up a 0-3 to 0-1 lead over Portarlington while also hitting three early wides.

For the first ten minutes of this game, The Rock looked the better team as they opened up a 0-3 to 0-1 lead over Portarlington while also hitting three early wides.

Unfortunately for the men in black, it was all downhill after their solid start as they conceded 1-10 without reply and did not add to their total until the sixth minute of the second-half.

To compound their misery, Ivan Lawlor was sent off after receiving two yellow cards in the space of three minutes midway through the second-half ending any lingering hopes they may have had of staging a late comeback.

However even if they had their full compliment of players for the entire hour, it would not have changed the outcome of the game as Portarlington cruised to victory to maintain their senior status for 2014.

They started slowly taking time to settle into the game and they were deservedly 0-3 to 0-1 behind after ten minutes. The Rock hit the ground running with David Murphy converting three frees and they were well on top in midfield winning the majority of breaking balls.

As the game progressed, Portarlington got more into the game and they upped the pace which The Rock found difficult to counteract.

Points from Brian Cleary, Shane McCauley and David Murphy edged Portarlington in front after 16 minutes and with their confidence up, they took control of the game.

They were winning all the primary possession in the middle of the field and they were much quicker to the breaking ball . This provided the platform for the forwards and Shane McCauley, Adam Ryan, Stephen O’Neill, Daryl Foy and Chris Booth all found the target before the break as they opened up a 0-10 to 0-3 lead at the interval.

In glorious sunshine with a strong wind blowing straight across the field in Mountmellick, Portarlington turned the screw at the start of the second-half adding a point from Adam Ryan and a killer goal from Chris Booth. The goal put 11 points between the sides and it came at the end of a defence splitting move with Brian Cleary playing the final pass before Booth slotted the ball to the back of the net.

A point from Stephen McDonald after 36 minutes, The Rock’s only score from play in the game, briefly halted Portarlington’s progress but the relief was only temporary as points from David Murphy, Kevin McGrath and Shane McCauley were followed by a second goal with substitute McGrath taking the pass from Adam Ryan before finishing past Terence Conlon.

That extended the lead to 16 and the hugely impressive McGrath, who only came on after half-time, added two more points to rub salt in The Rock’s wounds following the sending off of Ivan Lawlor.

In the closing minutes both sides rang the changes and with a gap of 18 points between them, it was no surprise that the pace of the game dropped as it limped towards an inevitable conclusion.

Both sides added three points in the closing minutes with all The Rock’s scores coming from frees from the boot of David Murphy while Portarlington countered with a point from Chris Booth and two from David Murphy.