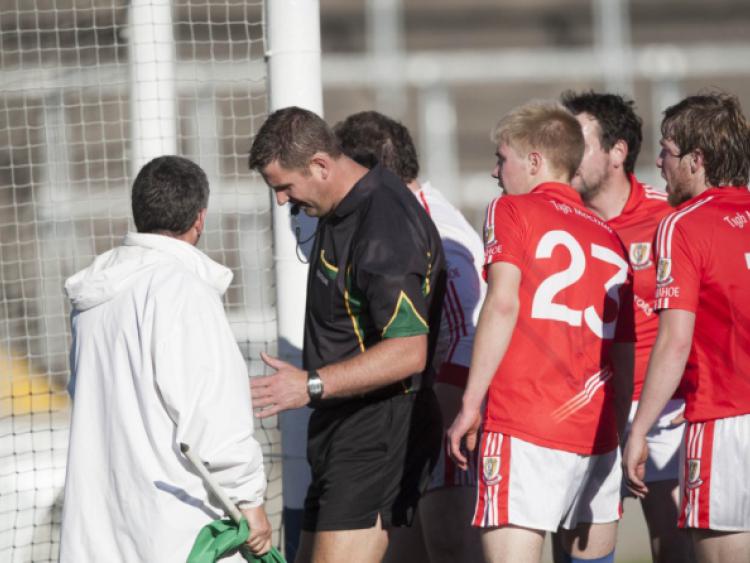 Emo’s ability to score goals at vital times was the decisive difference between the two teams in this tight relegation play-off.

Emo’s ability to score goals at vital times was the decisive difference between the two teams in this tight relegation play-off.

Considering this was a relegation match the quality was surprisingly good, as both sides found their best form in their attempts to remain in the senior ranks. Both had periods of dominance but it was the men from Emo who just shaded it in the end to win out on a scoreline of 3-12 to 1-14.

Emo got off to the perfect start when, inside the first minute, Nigel Murphy latched on to Darren Strong’s pass and slotted home to the back of the Timahoe net from ten yards.

Padraig Clancy got Timahoe on the scoreboard with a well worked point from twenty yards. Darren Strong pointed for Emo a minute later in what was an opening scoring flurry. The sides were level in the fourth minute when Timahoe’s Ruairi O’Conn0r dispatched a left footed drive from fifteen yards to raise the green flag after good Timahoe build up play.

The frantic pace continued with Timahoe scoring back-to-back points through O’Connor and Eoin Culleton to open up a two point lead.

Emo responded with a hatrick of unanswered points between the eighth and thirteenth minutes, Billy Sheehan’s smart turn and dispatch from thirty yards the pick of these.

Padraig Clancy hit a superb forty yard effort on the quarter hour to level affairs at 1-4 apiece, as both teams were canceling each other out in the early exchanges.

Emo veteran Mick Lawlor used all his craft and experience to create the space to point a minute later, the former Laois star may well be in the twilight years of his playing career, but he was still proving a handful for the Timahoe defence.

He scored his second in the twenty third minute to open up a two point gap as the first period drew to a close. Timahoe’s Ruari O’Connor hit the last three scores of the half to see his side go to the break one point to the good 1-8 to 1-7, and both sides really did deserve a break after a high octane opening period.

Emo were first to register in the second period through Darren Strong inside the first minute to level the sides for the fourth time.

Strong was on-hand to score one of the scores of the game three minutes later with a superb thirty five yard point which he curled over off the outside of the boot to give Emo a two point lead.

Three minutes later Emo supporters were sent into delirium with their side’s second goal of the game. A marauding run by Paul Lawlor saw him slip the ball underneath Roghan Headen in the Timahoe goal, the ball seemed to take an eternity to reach the target and it looked like Timahoe’s John Lowry had managed to scramble the ball off the line, however the umpires had no hesitation and the green flag was raised despite Timahoe’s protestations.

Timahoe weren’t going to give up their senior status without a fight, and they responded by hitting four unanswered points between the forty and forty fifth minute. Two Ruari O’Connor frees followed by a Sean Ramsbottom point reduced their deficit to four.

Padraig Clancy then pointed when it looked like a goal was on to further reduce the gap to three. However, a minute later Darren Strong raised his side’s third green flag, as good interplay involving Billy Sheehan and Jonathan Booth left Strong to dispatch from ten yards.

Timahoe battled to the final whistle and registered the final two scores of the game through Clancy but it wasn’t enough and Emo just held on for a deserved victory on a scoreline of 3-12 to 1-14.

It’s back to the IFC now for Timahoe, and for Emo, it means no instant return.