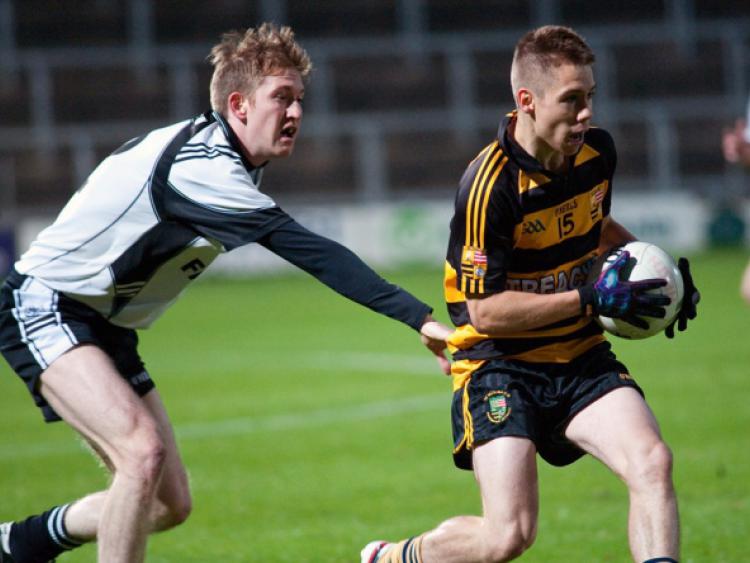 Three well-timed Arles-Killeen goals proved to be the crucial scores in this SFC quarter-final last Wednesday night, as they booked their place in the last four at the expense of The Heath.

Three well-timed Arles-Killeen goals proved to be the crucial scores in this SFC quarter-final last Wednesday night, as they booked their place in the last four at the expense of The Heath.

That they did so with only 14 men for over half the game was all the more impressive for Arles-Killeen, as they reacted much better to that setback than The Heath did.

When Billy O’Loughlin received two yellow cards in a little over a minute before half time, it should have been a boost for The Heath, but instead Killeen hit 1-1 before half time, with the goal coming from a penalty.

Another goal nine minutes into the second half more or less put them out of reach, but Paul Kingston made sure of the result when he fired home their third with a quarter of an hour left to play.

The game fizzled out dramatically after that, with only one score in the last 15 minutes, but Killeen won’t be too worried about that as they move one step closer to a first final appearance since 2006.

For The Heath, they will be disappointed with how their season ended, as they were very poor in the second half, but having flirted with relegation last year at least this year was an improvement. The sending off was the turning point, as it was Arles-Killeen who responded the better, and The Heath will have been disappointed not to have made better use of their extra player.

Prior to O’Loughlin’s dismissal it had been a good game, with nothing really separating the teams. Donie Brennan opened the scoring in the fifth minute with a free, before The Heath’s Evin Keane responded with the first of his four first-half points.

That opening exchange pretty much set the tone for the rest of the half, as the teams would be level on five different occasions after that. Evin Keane pointed a free to put The Heath in front and Donie Brennan quickly hit back for Killeen.

Brendan O’Shea, marauding up from wing-back, edged Killeen ahead with a point from the left wing, but an Aidan Bergin point, and a wonderful effort from Evin Keane gave The Heath the lead for the second time.

Again it was Donie Brennan to hit back, and further points from Donie Kingston and Conor Keightley either side of a Chris Bergin free had Killeen ahead by the minimum. Billy O’Loughlin’s red card arrived soon after, but Killeen hit back straight away with a great point from Conor Keightley.

Evin Keane again provided the riposte for The Heath, but in first half injury time, Paul Kingston won a high ball into the penalty area and was dragged down by Colin Nestor, and Eddie Kinsella had no option but to award a penalty.

Jason Enright stood up to take it, and his low drive to the bottom left corner of the net was a timely boost for Killeen heading to the dressing rooms at half time.

The second half started with Arles in good form once again, as Paul Kingston curled over a lovely point from the left corner, but The Heath were quick to respond thanks to a Robbie Dowling point from 30 yards out.

The next score was going to set the tone for what came next, and it was Arles-Killeen who delivered a hammer-blow. Paul Kingston was again the architect, as he won the ball on the right wing before playing a lovely pass to Dermot Julian in the penalty area, and he slotted home from close range to allow Killeen put one foot in the semi-finals.

The Heath hit back with a Chris Bergin free, but that was their last score, and the game was put beyond doubt three minutes later. Paul Kingston was the finisher this time, as he fired home from 14 yards to seal a deserved ten point victory.