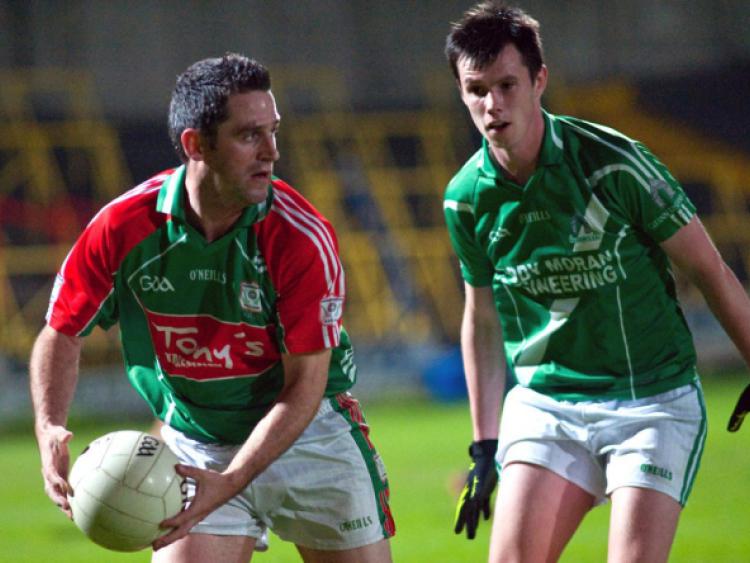 There has certainly been no lack of drama and excitement when Graiguecullen have taken to the field in this year’s Senior Football Championship and that was certainly the case again last Saturday evening.

There has certainly been no lack of drama and excitement when Graiguecullen have taken to the field in this year’s Senior Football Championship and that was certainly the case again last Saturday evening.

After 36 minutes they were nine points up against their neighbours Killeshin in O’Moore Park and they looked to be cruising into the semi-finals. However 13 minutes later they were just a point ahead after conceding a quick-fire 1-5 and they needed four late points, three from frees from Mark Doogue, to dig themselves out of the hole.

Killeshin stuck to their task right to the end and gave themselves one last chance of snatching the win thanks to a late goal from Cathal Brennan but time ran out on them and they were left to rue two glorious goal chances missed in the first-half. Had they converted one or both of those chances, it could have put a very different complexion on the final scoreline.

Graiguecullen built their lead by outscoring Killeshin 2-4 to 0-3 in the second quarter of the game but, as they did against Portarlington in the first round, they struggled for scores in the second-half adding two points in the first 21 minutes after the restart.

If Graiguecullen can put together an hour long performance, they could prove to be unstoppable in the semi-final and potentially the final however their tendency to go out of games for long periods will have to be of great concern to Joe Higgins and his management team and is one they will want to rectify ahead of their showdown with Arles-Killeen.

They started the game well scoring the first three points, two from Mark Doogue frees and one from Ambrose Doran, although they also hit four wides in the opening eight minutes. Killeshin created a great opportunity in front of the Graiguecullen goal but Eoin Brennan blasted wide of the target.

Points from Stephen Attride and Eoin Lowry got them off the mark but Graiguecullen hit back in impressive fashion when they opened up the Killeshin defence and Mark Timmons, wearing number three but playing at full-forward, crashed the ball to the back of the net.

Killeshin responded with an excellent point from Alan Brennan and one from Cathal Brennan but Graiguecullen responded emphatically with their second goal in four minutes with Mark Doogue converting from the penalty spot after Danny O’Reilly had been fouled as he bore down on goal. A point from Damien Lowry got Killeshin back within four and they should have been back within one but Cathal Brennan blasted wide with only Patrick Scully to beat.

Graiguecullen took full advantage rattling off the next four points to build an eight point lead but Killeshin had another glorious chance for a goal just before half-time but this time it was Jeff McDermott who hammered the ball side of the post with just Patrick Scully to beat.

That miss, the third of the half for Killeshin, left them trailing 2-7 to 0-5 at the break and soon after the restart they trailed by 2-9 to 0-6 as Graiguecullen extended their lead to what looked like a match winning margin.

However Killeshin were far from done and after points from Cathal Brennan (2), Stephen Attride and Ruairi Mannion, substitute Barry Ryan struck for a goal that left just two between the sides. Another point from Cathal Brennan reduced the gap to the minimum but that was as close as they got as Graiguecullen recovered their composure and three frees from Mark Doogue and a point from James Doogue gave them breathing space.

Into injury-time Cathal Brennan got Killeshin back within two with a well taken goal but it came too late to change the outcome of the game as Graiguecullen just about held on for a win that puts them into the semi-final. After three tremendously exciting games, it will certainly worth being in O’Moore Park for their showdown with Arles Killeen to see what they do for an encore.