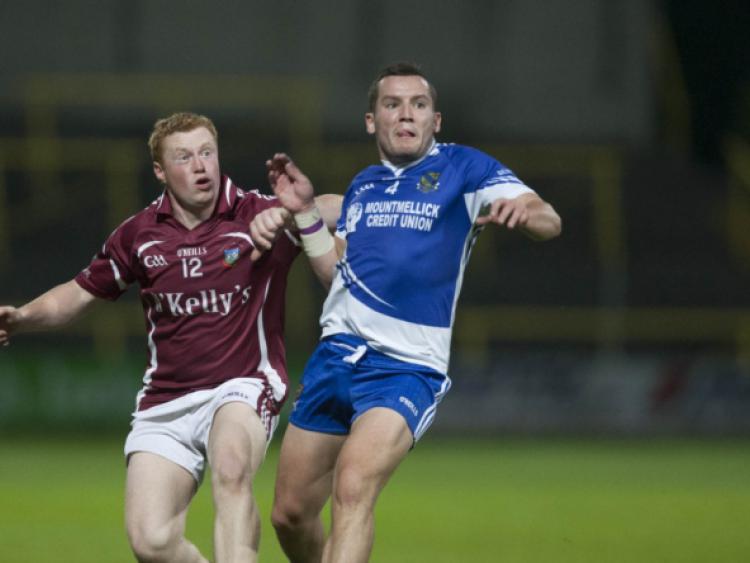 Arles-Kilcruise avoided the potential banana skin in their path by disposing of a plucky Mountmellick outfit that simply ran out of steam in the second half, but there was only one real talking point as the large attendance shuffled out of O’Moore Park.

Arles-Kilcruise avoided the potential banana skin in their path by disposing of a plucky Mountmellick outfit that simply ran out of steam in the second half, but there was only one real talking point as the large attendance shuffled out of O’Moore Park.

Having orchestrated his side’s seven-point win with yet another supreme display, Ross Munnelly received the first red card of his illustrious career with just over ten minutes remaining and the outcome already all but assured.

Munnelly fired over six excellent scores from play, created almost all of the rest and was the only real difference between the two sides.

And so, there was a general sense of amazement when Portarlington official David Murphy dismissed Munnelly along with Mountmellick full-back Shane Langan following a heated skirmish deep in the Mountmellick half.

No doubt Kilcruise will seek an appeal, especially given his obvious importance which he underlined against the unfancied Mountmellick. The Valleymen looked very impressive in the first half, and despite going behind to a first minute score from Munnelly, they hit back quickly through a Niall Mullen free.

Munnelly’s second was cancelled out by a superb Karl Donoher point and Mountmellick hit the next two without reply to briefly resume control. Niall Mullen hit both of those to take his early tally to three and with Kilcruise firing six scoreable chances wide of the mark Mountmellick were looking good.

However, Kilcruise have been down this road a lot more frequently than their opponents and five points in the final five minutes saw them carve out a three point lead. Chris Conway, Jason McLoughlin, a David Conway free and two more from the irrepressible Munnelly did the damage, but Mountmellick chalked one off the deficit with a real gem from Colm Coss who curled a magnificent effort over the bar from forty yards out on the stroke of the whistle.

Just as he did in the first half, Ross Munnelly resumed the scoring immediately after the restart to restore the three point advantage and when he followed that up with another one three minutes later it was clear that Mountmellick’s hopes were fading fast.

Conn Maher suggested otherwise when he raced down the right wing and fired over another hugely impressive Mountmellick score but the Arles men were finding their men with a lot less effort and with just over twenty minutes remaining they finally cut through the ‘Mellick rearguard to bag the only goal of the game.

Kevin Meaney fired a huge ball that was eventually gathered by Chris Conway. He played a clever one-two with Ross Munnelly, punching home the return ball into the back of Eoghan Keogh’s net to hand Kilcruise a six point lead. David Conway’s neat point a minute later extended that to seven and Mountmellick’s brave challenge had firmly faltered.

Brendan Reddin was introduced to shake their flagging forward line up and he managed to find the target with a fine point following strong build-up play involving Gearoid Hanrahan and Darren Fitzpatrick. However, that score, Mountmellick’s second of the half, would also prove to be their last and the solitary score of the final ten minutes came right at the death at the other end of the field courtesy of a simple David Conway free.

That barren scoring period was however a crucial one in terms of Kilcruise’s hopes of finally landing a Senior title. Ross Munnelly’s dismissal will, if left to stand, seriously hinder their hopes of turning over their bitter rivals Portlaoise, and the outcome of any appeal will have major repercussions.