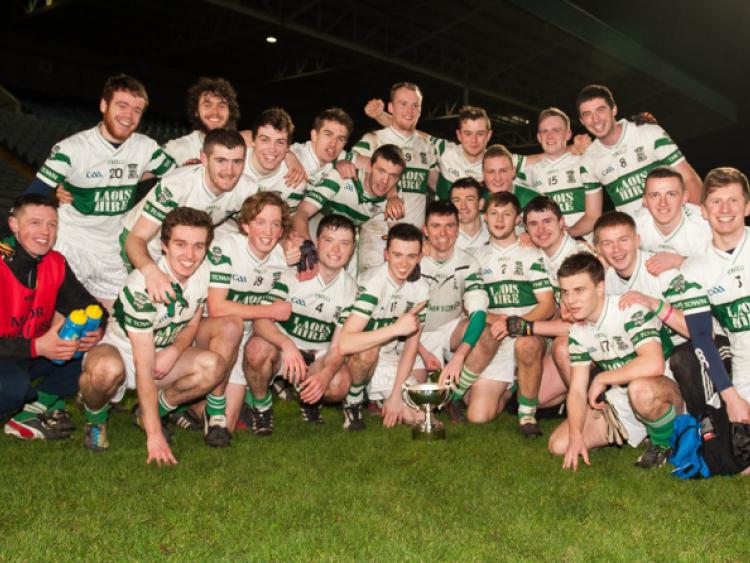 Having trailed by three points at the break before going five points down five minutes after the restart, Portlaoise bounced back with two Martin Staunton goals in the second half as well as 1-3 in the final six minutes of the game to steal the cup from Killeshin-Crettyard’s grasp to claim their first U-21 Championship since 2007.

Having trailed by three points at the break before going five points down five minutes after the restart, Portlaoise bounced back with two Martin Staunton goals in the second half as well as 1-3 in the final six minutes of the game to steal the cup from Killeshin-Crettyard’s grasp to claim their first U-21 Championship since 2007.

Portlaoise’s second half tally of 2-7 compared to Killeshin-Crettyard’s four points proved the difference in O’Moore Park on Sunday evening as Portlaoise came to the fore late on to land the trophy.

Portlaoise opened the scoring with just a minute elapsed with centre-forward, Dean Cullen, splitting the posts before going on to notch his second from resulting kick-out as Portlaoise took an early two point lead. Portlaoise continued to dominate the opening five minutes and found themselves three points ahead thanks to Conor Dunphy’s excellent point following a menacing run as Portlaoise appeared to be cruising.

Killeshin-Crettyard slowly began to come into the game and eventually announced their first score of the after six minutes with Evan O’Carroll converting a short-range free to cut the deficit to two points.

Killeshin-Crettyard completely turned the tables on Portlaoise and went on to dominate the next fifteen minutes as they slotted seven points on the trot to take a deserved four point lead. Laois Minor Footballer of the Year, Eoin Lowry, pitched in with three points, while Evan O’Carroll slotted a brace and Eoin Brennan a single as the game appeared to be slipping away from The Town.

Portlaoise replied in the twenty minute mark with David Holland raising the white flag before Martin Staunton followed suit. The half fizzled out with Killeshin-Crettyard firing another two from Lowry and O’Carroll, while Portlaoise’s Liam McGovern slotted one off his weaker left foot to send The Town in trailing by three points at the break.

It took Killeshin-Crettyard just seventeen seconds to restart the scoring with Eoin Lowry popping over his fifth of the day to extend the Killeshin-Crettyard lead to four points. Portlaoise replied almost immediately with Dean Cullen raising the white flag, but Killeshin-Crettyard went straight back on the attack and landed the next two points, both from Lowry, to open a five point gap between the sides with twenty-five minutes remaining.

Portlaoise set their comeback in-motion with a devastating 1-2 in five minutes to level the proceedings. Conor Dunphy provided the assist which sent Martin Staunton in one-on-one with Killeshin goalkeeper, Adam Brennan, with the Portlaoise poacher making no mistake. David Holland and Staunton followed up with points to level the game with nineteen minutes left to play.

Portlaoise went on to take the lead thanks to a Conor Dunphy point, but Killeshin-Crettyard equalised with ten minutes remaining with Evan O’Carroll firing his fifth point of the day to set the scene for a dramatic final ten minutes.

Industrious defender, Dean Lynch, wandered forward three minutes into injury-time to put the icing on the Portlaoise victory as they recorded a six point victory to claim the title.