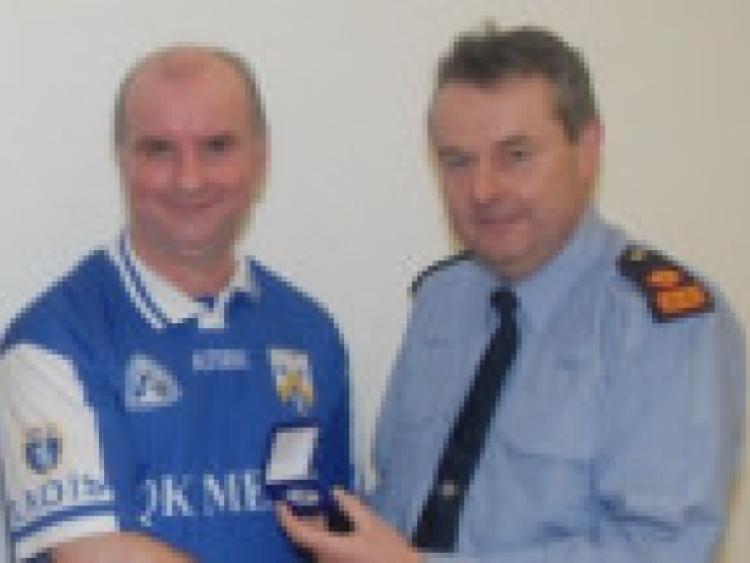 Last week, Laois handballers recorded a number of notable victories in the Leinster championships with the highlight being the success of Joe Brennan and Eddie Dunne in recording impressive victories to qualify for provincial deciders.

Last week, Laois handballers recorded a number of notable victories in the Leinster championships with the highlight being the success of Joe Brennan and Eddie Dunne in recording impressive victories to qualify for provincial deciders.

Eddie Dunne (Cullohill) gave an outstanding performance in his Emerald Masters B Leinster semi-final to defeat Gerry Murphy of Kilkenny. In a close first game, little separated the two players. Eddie showed the greater control throughout and played some excellent passing shots that kept his opponent continually on the back foot.

This ability to keep his Kilkenny counterpart under immense pressure finally paid dividends when Eddie won the crucial few aces at the end of the first game to take it on a scoreline of 21-15.

The second game proved more comfortable for the Laois handballer. His greater power and fitness were now evident against the fatigued Murphy and he booked his placed in the Leinster final by taking the second game 21-10.

In his Golden Masters B Leinster semi-final Joe Brennan (Monavea) found himself up against Pat Funchion of Kilkenny. This encounter proved to be a thriller between two highly accomplished and well respected handballers.

Pat Funchion was to make the brighter start to the opening game and built up an early lead. Despite Joe’s best efforts to reel in the deficit he had left himself with too much work to do and the Kilkenny man took the opening game 21-16.

In the second game, Joe upped the intensity and started to take more of his chances when the opportunities arose. Joe’s ability to kill the ball proved to be the difference and he levelled the semi-final at one game apiece on a scoreline of 21-12. In the deciding game, Pat Funchion mounted a spirited fight back but Joe kept his composure to overcome his opponent and progress to the Leinster final on a scoreline of 16-21 21-12 21-16.

Ray Fogarty (Cullohill) continued the Laois success by qualifying for the Masters B semi-final after a highly impressive victory over John Roche of Wexford 21-19 21-9. This is only Ray’s second year back playing competitive handball and with each passing round of the competition his performances have improved considerably. Ray now faces Stephen Barcoe of Kilkenny for a place in the Leinster final.

Unfortunately, there was no joy for Niamh Dunne (Cullohill) in her Ladies JB Leinster semi-final. After defeating Nastasha Patrizi of Westmeath in her opening round 21-10 21-9, she faced Sabrina Hughes of Dublin in the semi-final. After taking the first game 21-21 she agonisingly lost a tight second game 21-19.

In the third game Niamh built up what looked to be a winning lead of 13-3 however Sabrina was to stage a remarkable fightback to defeat the Laois girl 21-18 and eliminate her from this year’s competition. In the Ladies JB doubles Leah Dunphy Rachel Delahunty will face Audrey McCormack and Sabrina Hughes.

There was further disappointment for Laois when Paddy Donavan was defeated by Mick Dowling of Kildare in the Golden Masters semi-final while Wesley Neale and Larry Brennan lost out in the Junior B doubles quarter-final. In the quarter-finals of the Junior B singles, Michael Donavon was unfortunate to lose out to Jason Murphy of Wexford.

There was further disappointment for Paddy Donavan (Monavea) who lost out in the All-Ireland Garda 40x20 final. After defeating Tony O’Flaherty (Youghalarra) in the quarter-finals and Campbell Brennan (Ballaghaderren) in the semis, Paddy found himself up against Bob Byrne (Bridgetown) in a repeat of last year’s All-Ireland Garda 60x30 final.

It was clear from the off-set that Byrne was on a mission not to lose a second consecutive final to Donavan and played with great determination. Despite Paddy’s best efforts the Bridgetown man proved too strong for him winning the title in two games. aois handballers make Leinster Finals