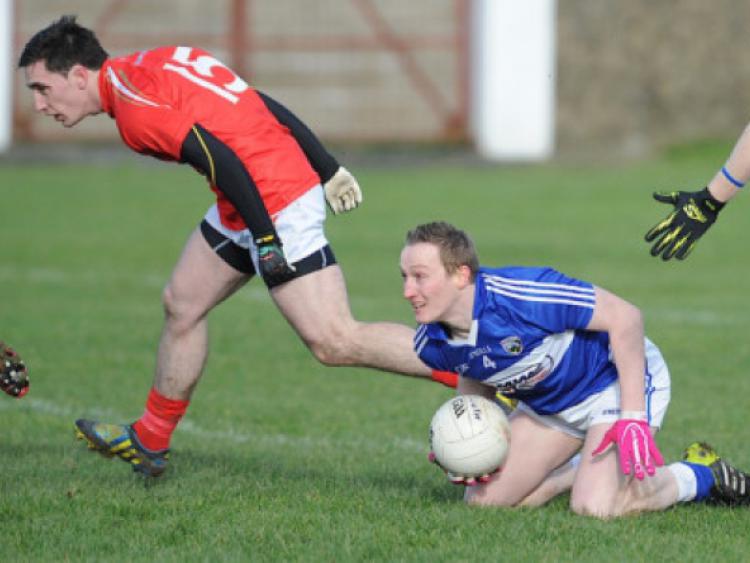 Laois senior footballers bounced back from their disappointing loss to Donegal in ideal fashion on Sunday afternoon, as they ground out a three point win over Louth in Drogheda.

Laois senior footballers bounced back from their disappointing loss to Donegal in ideal fashion on Sunday afternoon, as they ground out a three point win over Louth in Drogheda.

Reduced to 14 men just before half time as a result of Conor Meredith’s red card, it was really put up to Tomás O Flatharta’s side. They showed real grit though to absorb wave after wave of Louth pressure before coming up with the scores they needed to seal the win late on.

It leaves them in a much healthier position heading into the three week break now too, and they will look forward now to welcoming Galway to O’Moore Park in early March.

There were plenty of positives to take from this game too. Colm Begley made his return from injury, the defence stood up well to some searching examinations, while there were signs of good interplay in the forward line, although that still needs to be improved.

The three week break affords them the chance to do that, however, so at least Tomas O Flatharta and his management team will have a clear idea of what they want to work on in the training sessions to come.

Laois were forced to play into a the strong wind for the first half, but it showed little sign of impeding early on as they raced into the lead. Captain Ross Munnelly was stepping up to the plate, and it was his determined run which saw him fouled 20 yards out, and Donie Kingston tapped over the free.

Munnelly then finished off his own good work moments later, as he won another free on the right wing and managed to guide a shot over the bar despite the conditions. Louth eventually opened their account in the seven th minute with a free from Declan Byrne, but Laois were having the better of the play, and quickly hit back.

James Finn punished some poor handling in the Louth defence by scooping up the ball and firing over from distance, before Munnelly slotted over another free following hugely determined work from David Conway to win it.

Louth brieflt threatened to get back into it when they scored a couple of fantastic points from out on the right wing. Declan Byrne slotted over the first, with Andy McDonnell following up moments later to leave the minimum between them.

With their lead under threat, Laois responded superbly by scoring their first goal. Great interplay between Donie Kingston and Ross Munnelly resulted in Munnelly being put through one-on-one with Shane McCoy, and he rolled his shot past the Louth stopper and to the back of the net.

That score gave Laois a huge boost, and they were in on goal again six minutes later. Donie Kingston started a move that involved five of the six Laois forwards, as he won a break in midfield and played in James Finn. He offloaded to Ross Munnelly, who drew out the Louth corner-back before playing in David Conway, and the Arles-Kilcruise man then passed across goal to allow Conor Meredith to palm to an empty net.

Louth reacted well to Laois’ second goal, as Declan Byrne pointed a free before Andy McDonnell hit the target from distance to get them within in five. Laois then threatened to hit the self-destruct button, as Conor Meredith needlessly lashed out at Derek Crilly off the ball, and was rightly shown a red card.

Laois held on to their five point lead until half-time, but Louth started to quickly make in roads after the break.

It started with a free from close range, which was brought up for mouthing at the referee, and that got Louth off to a good start. Eoin O’Connor quickly added to it with a nice point after a good run, and thena Derek Maguire score made it three points in just two minutes from Louth, who now trailed by just two points.

Laois needed to kick themselves into life, and they finally got a score when Donie Kingston slotted over a free, after Gary Walsh had been fouled 25 yards out.

Louth were still having the lions share of possession, however, and despite a lull in the scoring, they were soon back in it with two points from Colm Judge to leave the minimum between the teams.

Laois could have wilted at that stage, but despite being a man down they really dug in, and rattled off three unanswered points from Walsh (2) and Kingston to wrestle back control of the game at a vital stage.

Louth managed a late point in reply, but it mattered little at that stage as Laois held on to claim a crucial victory.