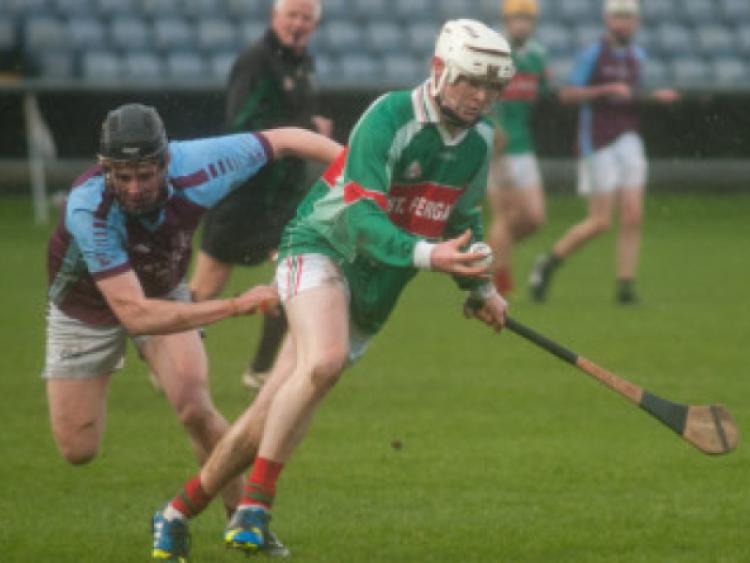 St Fergal’s opted to play with the considerable wind in the opening half, but could still only manage five points in the atrocious conditions. A late goal from Brian Corby eventually settled the game as Heywood struggled to accumulate the scores as the pitch condition deteriorated throughout the game.

If the weather wasn’t bad enough at throw-in, midway through the first-half the heavens opened leaving the usually pristine pitch in O’Moore Park with surface water in parts. The conditions eased in the second half, but the damage had already been done.

St Fergal’s opened the scoring after just two minutes when Clough-Ballacolla man, Aidan Corby, split the posts with his first attempt of the day to give Fergals’ an early advantage. Mark Kavanagh followed up Corby’s effort with a free from thirty metres to extend the Rathdowney school’s lead to two points after four minutes.

Heywood registered their first score of the game, and indeed their last of the half, after five minutes with full-forward, Kevin Bergin, superbly slipping inside his marker before calmly raising the white flag to cut the St Fergal’s lead back to the minimum.

St Fergal’s went on to restore their two point cushion after ten minutes with Shane Bowe breaking through two tackles before firing the ball over the bar. It was at this point that the weather conditions seriously deteriorated in O’Moore Park as a downpour began to bear down on the players’ backs.

A ten minute scoreless period ensued before St Fergal’s eventually broke the deadlock with full-forward, Stephen Bergin slotting over for his first of the day. Mark Kavanagh followed up Bergin’s effort five minutes later with a fine point from range to open a four point window between the sides going in at the interval.

With the wind behind their backs in the second-half, Heywood looked to quickly erase the Fergal’s lead. Just two minutes after the restart, Kevin Bergin picked up his second point of the game with a well-taken effort narrowing the gap to three points with almost the entire half left to play.

However Heywood failed to build on this as it took them fifteen minutes to find their next point. Shanahoe’s Rhian Bergin ended the drought with a sixty-five to leave just two points separating the sides with thirteen minutes remaining, but Fergal’s hit back with a Mark Kavanagh point to restore their three point lead.

With eight minutes remaining Heywood were gifted a glorious opportunity to level the proceedings from point-blank range, but an unfortunate miscue from Rory McEvoy meant the opportunity went begging and Fergal’s counter-attacked with Aidan Corby notching a point.

Heywood went on to once again cut the gap to a goal thanks to Rhian Bergin’s second point of the game, but St Fergal’s replied a minute before time with substitute Brian Corby rattling the Heywood net with a fantastic effort from the right flank to put the result beyond all doubt as St Fergal’s now progress to the final.