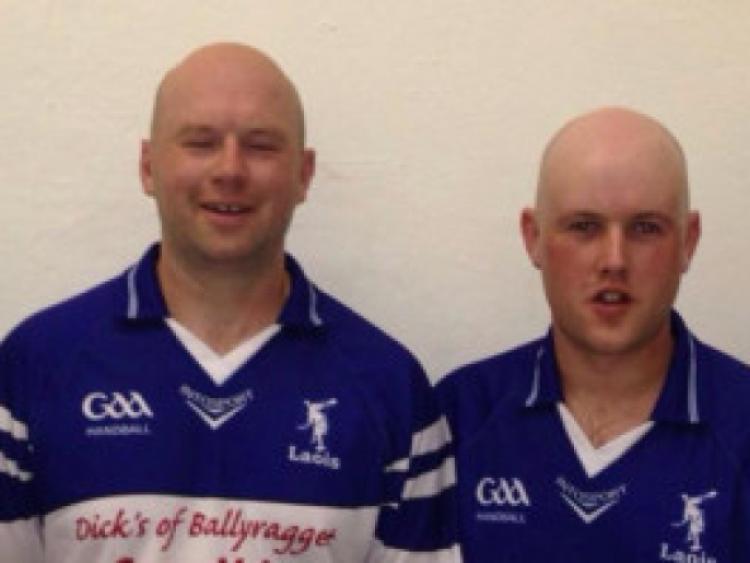 The Leinster 60x30 handball championships began in early June with Laois represented by a number of players with realistic ambitions of capturing provincial titles.

The Leinster 60x30 handball championships began in early June with Laois represented by a number of players with realistic ambitions of capturing provincial titles.

In the Men’s Junior B championships, Laos remain firmly in the hunt after Tómas Lennon and Michael Donovan recorded impressive opening round victories. Lennon proved far too strong for Stephen Smullen of Kildare winning their encounter on a scoreline of 21-4, 21-3. Michael Donovan played superb handball to overcome a dangerous opponent in Johnny Westlake of Wexford in two games.

Lennon followed up by defeating John O’Neill of Kilkenny in a three game encounte to progress to the quarter-finals where he now faces Padraig Roberts of Wexford. For Donovan, the talented Chris Doyle of Wicklow awaits him in the quarter-finals.

In the Men’s Junior B doubles, Laois also remain on track for Leinster success thanks to the exploits of Tómas Lennon and Ray Fogarty. In their first round game they easily overcame the challenge of Cathal McNamee and Eoin Hickey of Offaly 21-5, 21-4. The quarter-final encounter with Dan Breen and Anthony Martin of Kilkenny proved to be a much sterner test for the two Laois handballers but they showed the greater resolve to progress after edging a tight third game tie-breaker.

There was disappointment however for Andrew Dowling and Peter Whelan who lost out in their first round tie with Miley Connors and Michael Goggins of Wexford.

In the Ladies Junior B championships, Ciara Dowling began her quest for provincial success with a hard fought 21-12, 21-18 victory over Kristy Maher of Kilkenny.