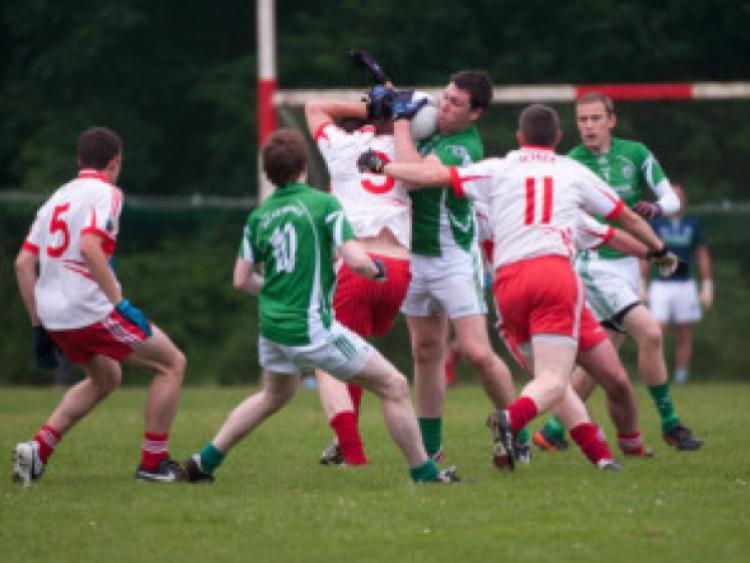 A thrilling encounter was witnessed by all in Emo on Thursday night as the home side clawed their way back from six points down with ten minutes to go to claim a hard-fought draw against Stradbally.

A thrilling encounter was witnessed by all in Emo on Thursday night as the home side clawed their way back from six points down with ten minutes to go to claim a hard-fought draw against Stradbally.

While the result means that Stradbally’s hopes of a semi-final place lay in tatters, Emo will certainly have the happier set of supporters as their share of the points means they’re guaranteed Division 1 football for next year.

Stradbally certainly settled the quicker of the two sides as with less than forty seconds on the clock Cormac Delaney picked out his twin brother, Conor, with a pinpoint pass leaving the centre-forward through to rattle the Emo net.

Conor Delaney gave his side a four point lead shortly after, but Emo replied with two apiece from Shane Murphy and Paul Lawlor, before Nigel Murphy’s effort put Emo into the lead for the first time.

Benny Lawlor eased Stradbally back into a narrow lead following a brace of frees. before Podge Fitzpatrick and Conor Delaney notched points too. Stradbally went in to the ressing rooms two points clear after Paul Lawlor pulled one back for the home side.

The twenty minutes following the restart were clean sailing for Stradbally as Conor Delaney, Cormac Delaney, benny Lawlor, Jamie Kavanagh and John Donohue all split the posts - while Paul Lawlor pulled one back for Emo as Stradbally opened up a six point lead.

Emo managed to grab a goal through Marc Carney which proved to be the catalyst to their comeback. Now dictating the play, Emo went forward and grabbed a brace from Shane Murphy as well as a point from substitute Mick Lawlor to draw level.

With time up, Emo had one final chance to claim the bragging rights as Glen Brophy was on the receiving end of Nigel Murphy’s well-weighted pass, but Brophy’s effort fell short and the points were split in Emo.