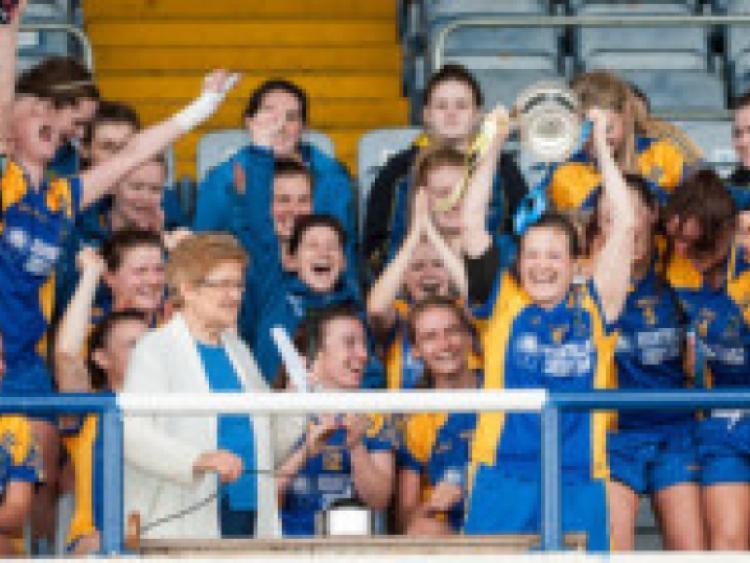 Sarsfields won their second Laois ladies county final in a row with a comprehensive victory over Timahoe on Sunday afternoon in O’Moore Park.

Sarsfields won their second Laois ladies county final in a row with a comprehensive victory over Timahoe on Sunday afternoon in O’Moore Park.

Such is the dominance of the clubs, for the last eight years they have met in the county final, Timahoe winning four and Sarsfields winning three prior to the game. The clubs met most recently in the League final in August which was a cracking game which Timahoe won by a late point in the dying moments.

With this in mind, the game was expected to be a close affair but sadly Timahoe’s championship final performance was a far cry from their performance in the league final.

Sarsfields got an early lead with points from Tracey Lawlor, Ciara Burke and Joyce Dunne putting them 0-3 to 0-0 ahead with seven minutes played. Timahoe’s Shona Barry made a good run through the Sarsfields defence and Martina Dunne was on hand to slot it over the bar for Timahoe’s opening score.

Four minutes later, Grainne Dunne made a superb run up the pitch from full back to set Sarah Quigley up for her first point of the game. Laura-Marie Maher scored a point for Sarsfields and two points from Tracey Lawlor saw them extend their lead 0-6 to 0-3 after twenty two minutes played, Martina Dunne scoring a free for Timahoe.

Dunne and Quigley scored a point each to close the gap within a point of their rivals but this was the closest they got to them in the entire game. Rachel Williams scored a superb goal in the 28th minute which rocked Timahoe who had just started to get stuck into the game. A point from Sarsfields Laura-Marie Maher and Timahoe’s Angela Casey left the score 1-7 to 0-6 in favour of Sarsfields at the break.

Laura-Marie Maher opened the scoring for Sarsfields after the restart kicking a point under pressure, Tracey Lawlor sending the ball into Maher from the throw up. Lawlor added two frees herself before Angela Casey was fouled and Martina Dunne converted the resulting free.

Ciara Burke kicked two wonderful left footed points as Sarsfields extended their lead. Claire Conlon was fouled in the square and awarded a penalty which Meaghan Dunne kicked low and hard into the left hand corner leaving the score at 2-12 to 0-7.

Timahoe were offered a life line in the 45th minute. Mo Nerney was fouled and she stepped up to take the penalty but Ciara O’ Loughlin saved it. This signalled the end of any hope of a Timahoe revival and their heads dropped.

Tracey Lawlor scored 1-2 while Ciara Burke added another as Sarsfields pulled away. Substitute Jessie Curley and Martina Dunne added consolation points for Timahoe but Tracey Lawlor’s 62nd minute goal, which she chipped over the head of Timahoe ‘keeper Bernie Deegan, was the icing on the cake for Sarsfields.

Sarsfields work rate was phenomenal from start to finish, their support play never faltered and every player fought hard for one other. Like Timahoe, Sarsfields have a huge panel that other clubs in Laois are currently lacking and this competition for places diminishes any sense of complacency and puts pressure on starting players to deliver because the competition is so fierce.

Sunday’s game proved how this works in Sarsfields favour and it’s hard to see them not retaining the Leinster Senior Championship title this year. They now advance to the Leinster club championship where they will meet the winners of the Longford and Louth champions in the semi-final in six weeks time.