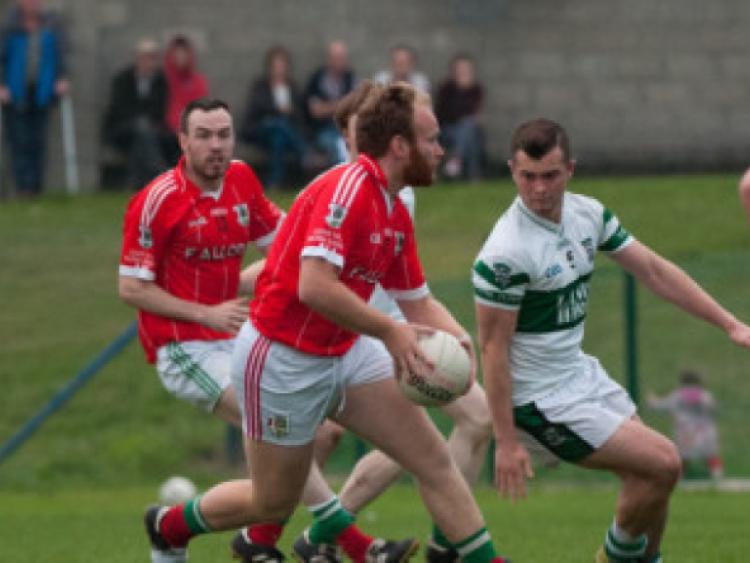 A run of four points unanswered in the first-half and five without reply in the second helped guide Clonaslee St Manman’s to top spot in Group B of the Intermediate Football Championship in Mountmellick on Friday evening.

A run of four points unanswered in the first-half and five without reply in the second helped guide Clonaslee St Manman’s to top spot in Group B of the Intermediate Football Championship in Mountmellick on Friday evening.

In a game that was finished in near darkness, Clonasee kept the scoreboard ticking over with far more regularity than Portlaoise who struggled for scores throughout. Portlaoise scored two points in a minute early in the first-half, 1-1 early in the second but their only other score came in the closing minutes. They had a number of other opportunities but hit nine wides, the post three times while they also dropped several shots short.

Clonaslee were much more efficient in front of goals and they opened the game in spectacular fashion with a goal from Willie Young after just four minutes.

Portlaoise responded with a ‘45 from Graham Brody and a point from Liam McGovern in the 10th and 11th minute respectively but they would prove to be their only scores in the half.

Clonaslee had the better of the territory and possession and points from three placed balls Glen McEvoy and one from Willie Young gave them a five point advantage at the break. They thought they had another but, after the umpire initially awarded the score, it was chalked off after the referee consulted with his linesman.

Portlaoise started the second-half determined to get back into the game with a goal and a point within five minutes of the restart. Both scores came from Liam McGovern with the goal coming after Clonaslee allowed a ball to bounce close to their own goal and the Portlaoise man was on hand to slot home the lose ball.

That was as good as it got for Portlaoise however as they didn’t manage to add to their total again until the final minute against a well organised and disciplined Clonaslee defence.

In the interim, Clonaslee added five points to their total to build an unassailable lead. John Molloy hit their first point of the second-half after 41 minutes with Glen McEvoy adding a point from a free soon after.

Ger Dunne extended the lead to four with 49 minutes on the clock and a brace of scores from Ger Reilly looked to have ensured a comfortable win for Clonaslee.

Portlaoise continued to push late on but a save from PJ Fitzpatrick denied Aaron Rafter and while Liam McGovern did add a late point from a free, it was too little to change the outcome of the game.