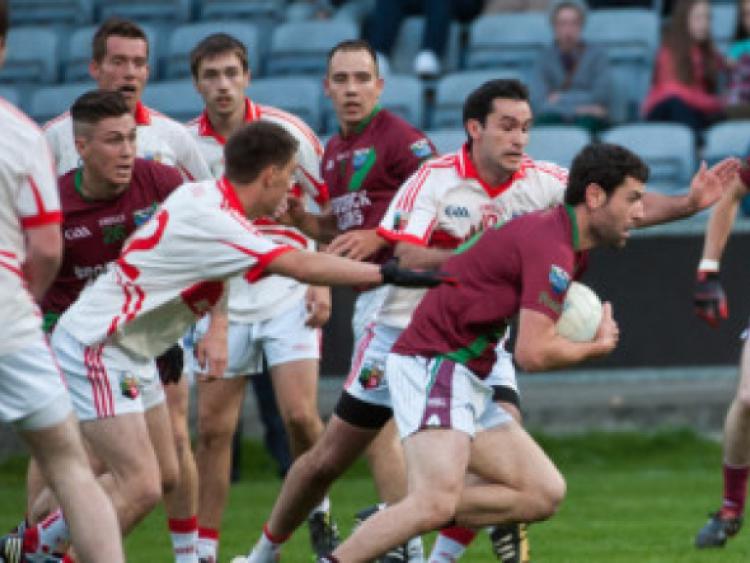 Portarlington hit three points in the last ten minutes to edge their way past Emo in a hugely entertaining SFC clash in O’Moore Park on Saturday.

Portarlington hit three points in the last ten minutes to edge their way past Emo in a hugely entertaining SFC clash in O’Moore Park on Saturday.

The beaten league finalists were deserving winners too, producing the scores that were needed when the pressure was at its highest.

The manner in which they won will have been a massive fillip for this team as well, ekeing out a win in very testing circumstances. It wasn’t a particularly high scoring game, but it was close throughout, and was played with at a good pace.

Portarlington had that bit more in their legs in the closing stages too, although their good work to open up the three point lead was almost undone. Emo launched a high ball into the penalty area in injury time, and in the resulting scramble Mick Lawlor saw an effort on goal trickle wide.

Portarlington now go on to meet Portlaoise, the side who beat them in the league final earlier this year. It is the benchmark for any side in the championship, and while Port did well here, they will have to improve exponentially.

They will definitely have to be more ruthless for a start, as they were sloppy in front of goal at times. They have character though, as well as some pace and a good spread of scorers, so that’s not a bad formula to work with.

In the early stages of this game, however, they looked to be headed for the exit door. Emo could scarcely have asked for a more perfect start. They won possession from the throw in and attacked with ruthless efficency, as Darren Strong came charging onto a pass 21 yards out before unleashing a powerful shot to the bottom corner.

Two minutes later, Brian Gorman was lofting the ball between the posts and Emo had a four point lead inside of three minutes, with Portarlington struggling to make an impression. They finally opened their account in the sixth minute, with Patrick O’Sullivan pointing from 21 yards.

That sparked them to life, and they added a second point five minutes later with a free from Shane McAuley. Jason Moore then went on a blistering run from the half back line before pointing frem 30 yards out.

Now within one, Port got themselves level thanks to Kevin McGrath, but after all the effort put into restoring parity, they seemed to switch off, with Emo wrestling back control of the game.

Nigel Murphy pointed from close range after being set up by Conor Lawlor, and Evan Costello then hit the target from a long range free. Costello then got in on the act from play, popping over the bar from 21 yards as Emo now had the goal to separate them from Port.

The final act of the half was another point for Kevin McGrath, as Emo lead by to at the break, 1-4 to 0-5.

Colm Murphy swung over a superb point in the opening miute of the half to reduce the gap to the minimum, but David Gorman responded for Emo to keep the two point gap. Then, the score that swung the game in Port’s favour arrived.

It came from innocuous enough beginnings, as a high ball lofted into the square was contested by Stuart Mulpeter. it broke to Colm Murphy, and he set David Murphy up for a tap in.

The sides traded points over the next 12 minutes or so to see them level on 1-8 each going into the home stretch. Port then kicked on, with Adam Ryan, Joey Sweeney and Christopher Booth all splitting the posts to give them what would prove to be an unassailable lead.

Evan Costello managed a late free in reply, but it was too little, too late at that staged for Emo, as Port move on to the last eight.