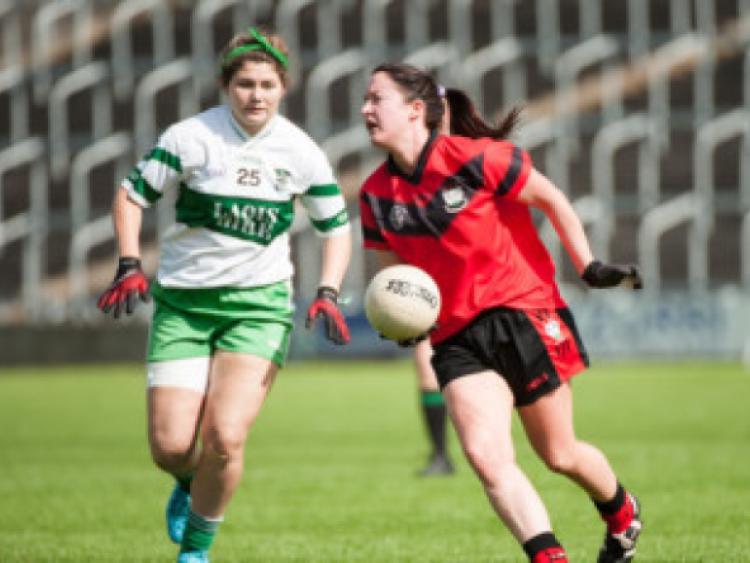 A late Aisling Kehoe free secured Portlaoise a draw and a chance to play the Senior B final again in the replay next week.

A late Aisling Kehoe free secured Portlaoise a draw and a chance to play the Senior B final again in the replay next week.

It was a game of two halves; Shanahoe very much dominated the opening half while Portlaoise dug deep in the second half to ignite a comeback.

Shanahoe won the throw up, Kate Jacob ran in on goals but her shot deflected into the hands of Laura Finlay who slotted it over the bar. Aisling Kehoe opened the scoring for Portlaoise, Fiona Dooley running up the pitch to set her up for a score in the third minute.

Nóirín Kirwan was in fine form, scoring three points in the opening ten minutes. Kirwan’s scores and a point from Lisa Dunne put Shanahoe 0-5 to 0-1 ahead after ten minutes.

Portlaoise’s Laura Nurney worked hard for her side and her efforts were rewarded in the 12th minute when she was fouled for a free which Kehoe converted. Shanahoe continued to press on, wing back Martha Kirwan running up the pitch and scoring a superb point. Portlaoise got back into the game in the 15th minute. A swift pass by Kehoe into the hands of Nurney created the space and she buried the ball into the back of the net.

Nóirín Kirwan responded to this with a long range effort from a free and was on hand a minute later to set up Lisa Dunne for a goal, Mary Griffin also assisting. Kehoe scored another point for Portlaoise, Alison Taylor and Orla Carroll setting her up.

Shanahoe however pulled away in the last five minutes, two points from Mary Griffin and another point from her sister Nóirín saw Shanahoe lead 1-10 to 1-3 at half time.

Shanahoe started the second half strongly, Mary Griffin sending the ball in to Lisa Dunne from the throw up for the first score of the half. Shanahoe’s passing was very good throughout the match and their support play was impressive to watch.

Fiona Dooley opened the scoring for Portlaoise with a point and Alison Taylor’s 40th minute goal ignited a Portlaoise revival, Ellen Healy and Claire Dunne setting her up for the goal. Two points from Nóirín Kirwan kept their lead but the strong wind aided Portlaoise and they utilised it well.

Three points from Kehoe and a goal by Sarah Phelan brought the sides level for the first time since the third minute. Nóirín Kirwan was unfortunate to miss two frees late in the game which could have won the game for Shanahoe. The two sides meet again in a weeks’ time in what is sure to be a cracking replay.