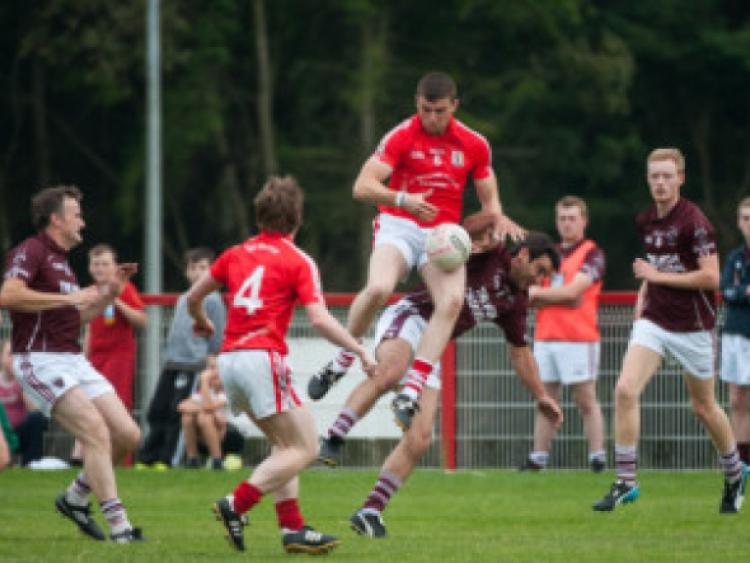 Despite playing two thirds of the game with fourteen men, Timahoe secured themselves a place in the Intermediate semi finals with a comfortable win over Kilcavan.

Despite playing two thirds of the game with fourteen men, Timahoe secured themselves a place in the Intermediate semi finals with a comfortable win over Kilcavan.

Timahoe’s Padraig Clancy got the ball rolling for his side, winning the throw up and being on hand to receive a pass from Damian O’Connor for the game’s opening score inside the opening 30 seconds.

Clancy added another point two minutes later, followed by a point from Damian O’ Connor as Kilcavan struggled to convert their chances.

Timahoe kept adding to their tally, John Lowry scoring a point when Martin Bergin’s shot at goal rebounded off the post. Kilcavan’s Barry Mangan set up Michael Tarpey for his and Kilcavan’s first score in the 11th minute. Tarpey was on target again a minute later as Kilcavan got into their stride and used the diagonal ball to set their veteran full forward up for a superbly taken score.

Clancy, Sean Ramsbottom and Declan Conroy all found the target for Timahoe, extending their lead. Sean Ramsbottom received a red card for an elbow on Mangan in the 22nd minute and this ignited a Kilcavan revival.

Mangan scored an excellently struck point which lifted the Kilcavan spirits momentarily however Timahoe responded emphatically when Richie Oxley skilfully laid the ball off to Damian O’Connor who ran through and slotted the ball past Eamon O’Brien and into the back of the net.

Oliver Dixon kept Kilcavan in it with a well converted free and this was followed up when the lethal combination of Michael Bermingham and Barry Mangan worked the ball in well and Jim White slotted the ball into the back of the net just on the cusp of half time.

This left the scores at 1-7 to 1-4 in favour of Timahoe, Ramsbottom’s sending off had a considerable impact to the dominance Timahoe had in midfield in the first 20 minutes. Kilcavan began to win more ball in this area after the sending off and this helped to close the gap.

Good performances from Timahoe’s Kieran Lennon, Sean Daly and Damian O’Connor helped them maintain their lead while Clancy’s movement and distribution of the ball was key to victory. Timahoe advance to the semi finals while Kilcavan face the dreaded relegation battle.