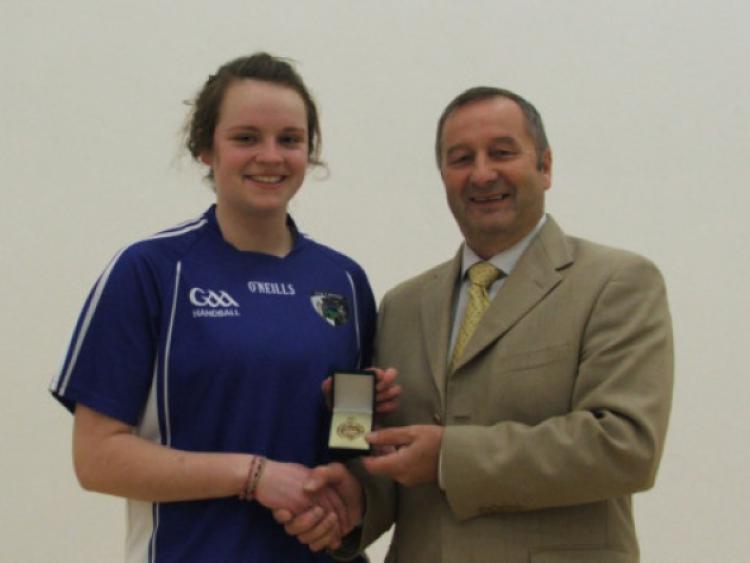 This was a wonderful achievement by the rising star of Laois handball and adds to her impressive collection of titles already won in 2013.

In the first game, Niamh made a lightning start building up an early 13-6 advantage. Doyle then showed good fighting spirit in battling back and winning the next few aces to leave the score 14-10. However, despite being put under immense pressure by her opponent, Niamh showed great composure and finished the game strongly winning it on a scoreline of 21-10.

To the joy of the large Laois support in attendance, the second game proved to be a one-sided affair with Niamh playing some scintillating handball.

The intense training over the last number of months certainly paid off as Niamh impressively won the second game 21-2 with an array of quality shots that her opponent was powerless to return.

This was a title Niamh thoroughly deserved to get her hands on after the heartache of losing in an All-Ireland final the previous year. For the Cullohill handball club it caps a remarkable year at juvenile level with the club also winning a boys U13 Leinster doubles title recently when Eoghan Doheny and Padraic Dunne played fantastic handball in defeating Wexford 15-1 15-1 in the final. Further to this success, the boys also won the 2013 Leinster Cumman na mBunscoil Championships.

With the huge efforts being made at underage level to improve standards in the county it is hoped that many more provincial and national titles can be won by both Cullohill and Monavea handballers in the near future.

Next Saturday at 3pm in O’Loughlins, Peter Whelan and Andrew Dowling (Monavea) will play Cork in the Junior B All-Ireland final. We wish the boys every success in the final and hope they can replicate Niamh’s victory and bring a second handball All-Ireland title back to the county this year.