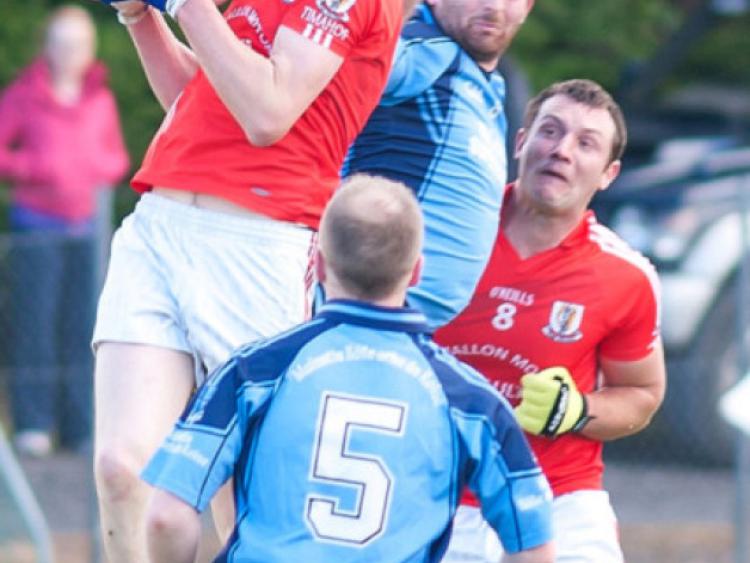 Despite hitting 14 points in the first-half when playing with the wind, Timahoe eventually saw off the determined challenge of neighbours Ballryoan Abbey in miserable conditions on Saturday evening.

Despite hitting 14 points in the first-half when playing with the wind, Timahoe eventually saw off the determined challenge of neighbours Ballryoan Abbey in miserable conditions on Saturday evening.

A torrential downpour greeted the players as they came onto the field but Timahoe were quickly off the mark with Eoin Culliton slotting over a point inside the opening minute. Mark McDonald replied for Ballyroan Abbey but Padraig Clancy edged Timahoe ahead again after three minutes.

However Timahoe would kick six wides before they added to their total through Richard Oxley with Ballyroan keeping pace with points from Ciaran Keegan and MJ Tierney. Padraig Clancy hit Timahoe’s fourth point on the cusp of half-time, 13 minutes after their previous score, to leave his side a point ahead.

MJ Tierney drew Ballyroan level for the fourth time in the game just seconds after the restart but Timahoe were quickly back in front with Ruairi O’Connor finding the target.

The crucial score came after 36 minutes when a dangerous ball from the right wing from Colm Lawlor was fisted to the back of the net by Padraig Clancy.

Timahoe almost had a second goal soon after but Martin Bergin was denied by a brilliant save from Gary Scully. Timahoe extended their lead to five soon after when the best move of the game resulted in a point for centre-back Joe O’Connor but Ballyroan hit back with two points in two minutes from MJ Tierney.

Ballyroan ‘keeper Gary Scully again came to his side’s rescue midway through the half when he deflected a powerful goalbound shot from Padraig Clancy over the bar however it would be Scully’s last contribution as he suffered a painful hand injury in the process of making the save.

Timahoe began to pull away with points from Robbie Foyle and Martin Bergin but Ballyroan were proving very difficult to shake off with MJ Tierney adding two more long range points to reduce the gap to four.

Three minutes from time Timahoe again were denied a goal with substitute ‘keeper Trevor Phelan denying Conor Whelehan but the lead was soon five when Ruairi O’Connor slotted over his second point.

Again Ballyroan rallied with points from MJ Tierney and Jamie Whelan to get back within three and they threw eveything forward in search of an equalising goal.

Unfortunately for the visitors, the ball wouldn’t break their way close to the Timahoe goal and the home side wrapped up the win three minutes into injury-time when impressive substitute Robbie Foyle slotted over his second point.