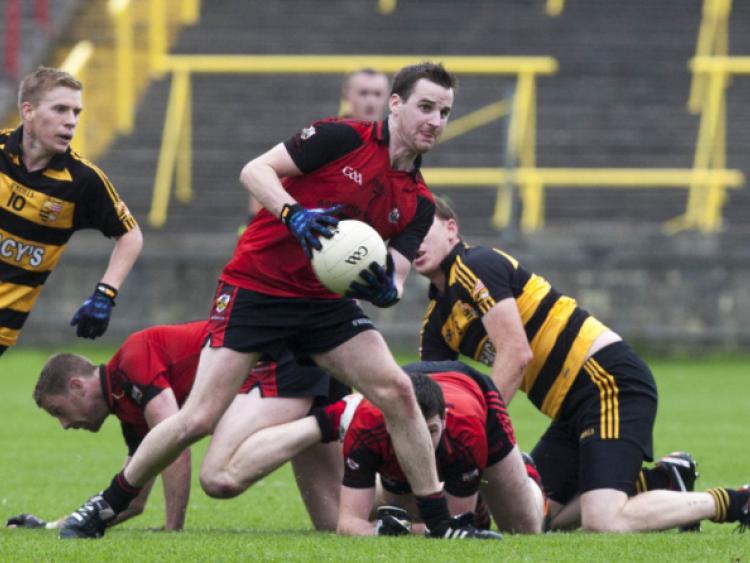 A second half revival saw The Heath eclipse The Rock in the first of a thrilling triple-header in O’Moore Park on Saturday evening.

A second half revival saw The Heath eclipse The Rock in the first of a thrilling triple-header in O’Moore Park on Saturday evening.

It is a victory that assured The Heath involvement in the championship while condemning The Rock to the brink of relegation. It wasn’t pretty, with very little space allowed for either side to play some decent football, but The Heath won’t be worried about that as they look forward to the next round free from relegation worries.

They could hardly have gotten off to a better start. Straight from the throw-in, Seamus Mulhare grabbed the ball and after a marauding run forward he fired a looping shot over the head of The Rock’s keeper Terence Conlon and into the top right hand corner of the net.

Ciaran O’Brien followed that with a neat point and The Heath were four points up in the blink of an eye.

The Rock replied in style however, and after two pinpoint David Murphy frees they took the lead midway through the first half thanks to a superb team goal.

Tommy McDonald’s ball down the left sideline was collected by Shane O’Connell, who in turn found Feargus Dunne in space.

He spotted Ivan Lawlor in space and a crisp cross-goal ball was collected and dispatched by Lawlor beneath the despairing dive of Heath keeper Shane Booth.

In the run up to the break The Heath twice equalised before The Rock edged back in front again, mostly from the accuracy of David Murphy’s frees, but also helped by a fine Kieran Carroll point.

With the help of those scores, it was The Rock who went in leading at the break by a single point on a 1-5 to 1-4 score-line.

Just like in the opening half, it was The Heath who got out of the blocks that little bit quicker aided by the introduction of Chris Bergin and John Booth to their forward line.

Evin Keane equalised from a free two minutes in and Booth edged his side back in front with a superb point with his first touch of the game.

David Murphy notched his first from play after a strong run from Kieran Carroll and Carroll was heavily involved two minutes later, this time feeding Shane O’Connell who swept a lovely left-footed effort over the bar.

The Rock were back in front for the fifth time with twenty minutes to go and it looked like they might just have enough to hold on, but The Heath had other ideas and they fired over seven unanswered points to leave The Rock bewildered.

Jimmy Nerney started that sequence as the game entered its final quarter and another score from the impressive Evin Keane swung the lead back in The Heath’s favour.

Chris Bergin showed moments of real magic following his introduction and if his first score was good, where he collected a short free to fire a snap-shot from thirty yards over the bar, his second was as good a score as you’re likely to see all championship.

Nothing looked on as Bergin gained possession close to the endline but he somehow swung his left-footed effort into the tiniest of angles and from that moment on it was always going to be The Heath’s day.

Evin Keane added another three to his tally, one from a free and two from play, and although Stephen McDonald pointed at the other end to reduce the arrears to five it was too little too late.

To emphasise that, John Booth fired a late goal to round off a fine win for The Heath. They must now wait for Thursday night’s draw to find out who they face in Round 3, but for The Rock, it is must-win for them now in their relegation playoff against Portarlington.