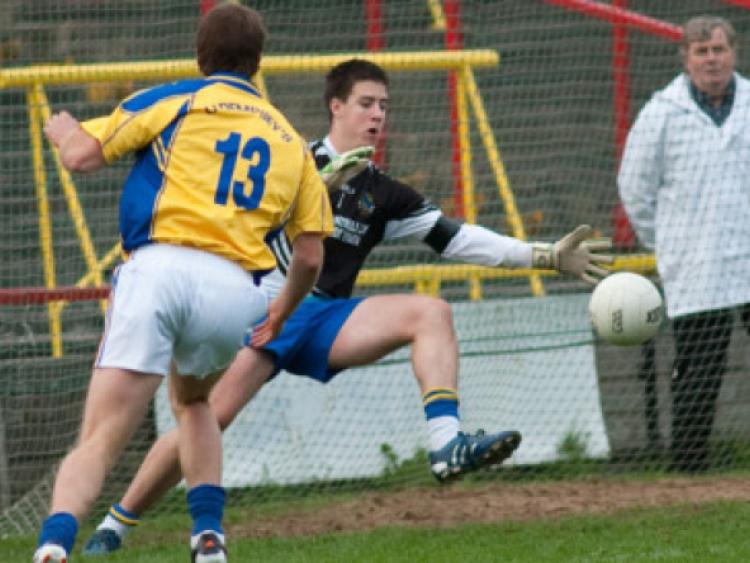 A dominant second half performance from O’Dempsey’s saw them book their place in the quarter-finals of the SFC on Sunday night.

A dominant second half performance from O’Dempsey’s saw them book their place in the quarter-finals of the SFC on Sunday night.

Eddie Kelly’s side had looked out of sorts for much of the opening half as they struggled to handle a lively Mountmellick team, but a fortuitous goal before half-time swung the game in their favour.

Mountmellick ‘keeper Adam O’Reilly lost possession as he tried ot burst out of the penalty area, and ball fell kindly for Ed Kelly, who supplied the finish. While the teams were still level at half time, the score breathed life into O’Dempsey’s and they went on to play some lovely football in the second half.

The decision to move Peter O’Leary out of full-back late in the first half also helped O’Dempsey’s, as his pace and direct running was another factor in helping O’Dempsey’s to the win here.

When the Killenard men opened up the pitch and started to create space they were a team transformed from the one which laboured for most of the first half, and they will have learnt a lot from the game.

For Mountmellick, their lack of experience told in the end, as the setback of conceding the first goal really knocked their confidence. They showed they can play some nice football though, but they must build on that if they are to progress any further this year.

They can certainly take heart from how they started the game, as they controlled proceedings from the throw in. Darragh Hanlon opened their account with a long range score in the third minute, before he then won a free which Colm Coss pointed.

Mountmellick were on top all over the field during this spell, and Mark Dowling pointed a 45 and Niall Mullen landed a free from distance as they opened up a four point lead.

O’Dempsey’s finally opened their account in the ninth minute through Bryan Meredith, and Ed Kelly quickly added another from a tight angle. Mountmellick weren’t panicking just yet though, and showed good composure to bounce back and score the next two points, from Karl Donoher and Niall Mullen, to regain their four point lead.

O’Dempsey’s introduced Eoin Finlay for the injured Brian Behan and made a number of positional switches too, and slowly they started to take effect. Michael Finlay pointed a free and Conor Meredith added another as they found a bit of form, and then Ed Kelly pounced on O’Reilly’s mistake to score their first goal.

That put O’Dempsey’s a point up, but a Niall Mullen free sent the teams to the dressing rooms level at 0-7 to 1-4.

Mullen was on target again four minutes into the second half to give Mountmellick the lead, but that would be last time they were ahead. Peter O’Leary responded with a point at the other end, after some last-ditch defending by Mountmellick denied O’Dempsey’s a goal.

Barry Kelly and Eoin Finlay pointed within a minute of each other and from then on there was only one team in it, as O’Dempsey’s just pulled further ahead.

Brian Nugent added a free before a wonderful move that started with Peter O’Leary catching a ball on their own endline, finished with Eoin Finlay curling over a lovely point at the other end.

Brian Nugent added two more, one from a free, to make it seven points without reply for O’Dempsey’s, and they were firmly in control now.

Niall Mullen tapped over a free to break that run, but moments later Míchael Finlay raced clear on goal to fire home O’Dempsey’s second goal and secure their place in the last eight.