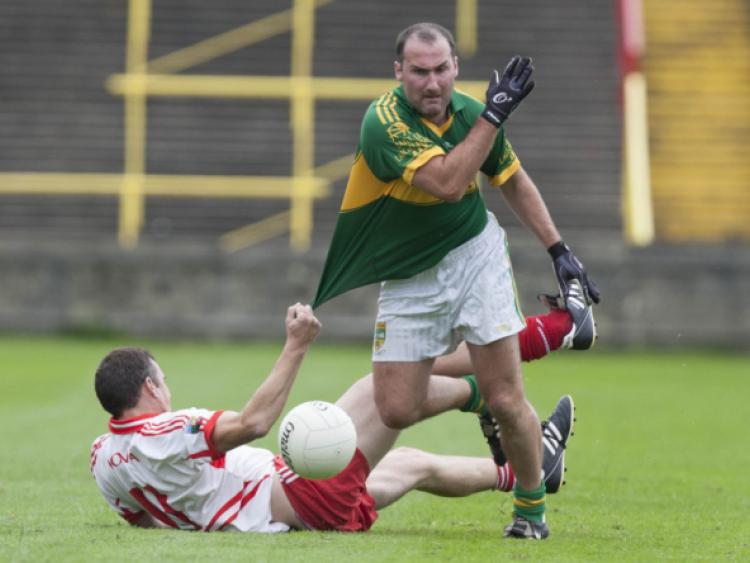 So far the Laois Senior football championship has been one of surprises and upsets and Ballylinan added to the mix by defeating a favoured Emo side in O’Moore Park on Sunday morning.

So far the Laois Senior football championship has been one of surprises and upsets and Ballylinan added to the mix by defeating a favoured Emo side in O’Moore Park on Sunday morning.

A tit-for-tat game throughout, Ballylinan were the more clinical in taking their chances, and although Emo never gave up the ghost, they came up short against a much improved Ballylinan who held on for a 0-11 to 0-14 win.

Ballylinan were first to register through Gary Walsh who flashed over from thirty yards inside the opening two minutes.

Paul Lawlor got Emo up and running in the fifth minute converting a thirty five yard free before he then added his second with a good score on the run three minutes later.

Ballylinan then hit two points back-to-back, as wing-forward Ciaran Farrell pointed from thirty yards out before Gary Walsh slotted over another free.

Paul Lawlor found Billy Sheehan with a good long ball and the Laois star stroked over from twenty yards to leave the scoreboard reading 0-4 to 0-3 to Ballylinan on the quarter hour.

The game ythen swung back in Emo’s favour, as Sheehan and Lawlor registered two unanswered points to give Emo a 0-5 to 0-4 lead on the twenty minute mark.

Gary Walsh was on hand to convert another free following a foul on midfielder Jamie Farrell to tie the game, and that would spark a run of scores for Ballylinan.

Walsh’s free was followed by three more as Ciaran Farrell fired over his second point of the first half followed by a free from Walsh opening up a two point lead. The increasingly impressive Walsh showed good hands to control a high ball and drill over from thirty yards to finish the first half scoring, giving Ballylinan a 0-8 to 0-5 interval lead.

No doubt some harsh words were exchanged in the Emo dressing room and the villagers responded by scoring the first two scores of the second period.

Paul Lawlor was now firmly in control at midfield and after an excellent catch, he stroked the ball over the bar from over thirty yards out. Nigel Murphy was on hand to covert a fine team score involving Evan Costello and Billy Sheehan to reduce the gap to one in the thirty fifth minute.

Gary Walsh added another free in the thirty sixth minute and a moments later struck one of the scores of the game. Tight on the stand side with little angle to play with, the Laois star managed to convert from thirty yards.

Evan Costello struck over from close range to leave the scoreboard reading 0-9 to 0-11 in favour of Ballylinan as the game entered the final ten minutes.

Ballylinan’s Alan Farrell and Emo’s Darren Strong exchanged points in the fiftieth and fifty first minutes as the game continued its point-for-point pattern.

Ciaran Farrell converted an impressive long range free in the 55th minute to put some daylight between the sides with the score 0-10 to 0-13 as the clock ticked towards the sixty minute mark.

Lawlor, who tried everything in his power throughout the game to get his team over the line, converted a fifty eighth minute free to reduce the gap to two and kick-start Emo’s search for a winning goal.

Emo tried desperately to work an opening but weren’t able to repeat the heroics of Graiguecullen’s Mark Timmons the previous evening and couldn’t find a way past the resolute Ballylinan rear guard.

Gary Walsh fittingly fired over an injury time free to cement victory for Ballylinan and bring his personal haul to ten points. Despite desperate efforts by Emo they weren’t able to bridge the gap and Ballylinan finished winners on a scoreline of 0-14 to 0-11.