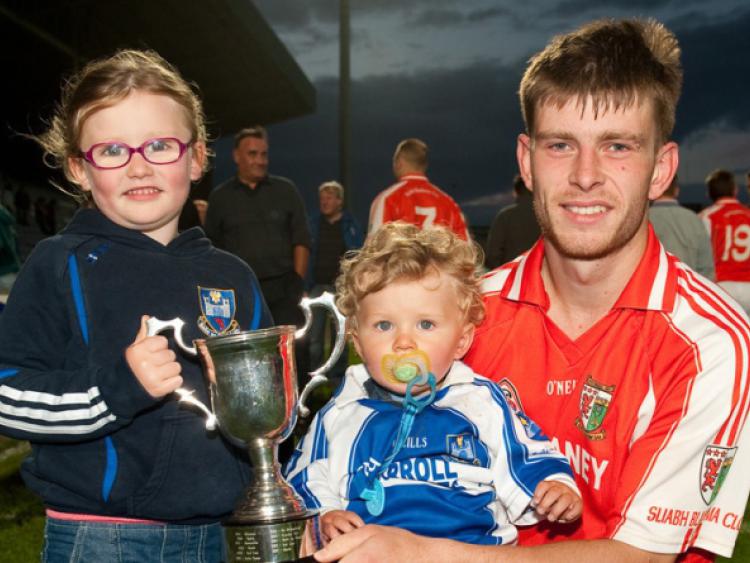 SlieveBloom-Castletown secured Junior A football for 2013 last Tuesday night as they saw off the challenge of Emo in O’Moore Park in an entertaining Junior B final.

SlieveBloom-Castletown secured Junior A football for 2013 last Tuesday night as they saw off the challenge of Emo in O’Moore Park in an entertaining Junior B final.

Two first half goals from Ben Conroy laid the foundations for the victory, as they saw off an Emo side which had a potent looking blend of youth and experience. Emo will no doubt feel they could have won it, despite the final margin, as they were very wasteful in attack.

At the other end, however, Slieve Bloom were a model in economy, as they worked scores very well, especially in the second half when the game opened up. Their defence stood up well to scrutiny too, and they held Emo scoreless for the last 27 minutes.

While most of the Slieve Bloom-Castletown team will be more accustomed to having their names feature in these pages for hurling reports, they showed last Tuesday that there are some very talented footballers in the club too, and the likes of Ben Conroy, James Hooban and Gearoid Gaughan all caught the eye.

There is no doubt that Slieve Bloom-Castletown will be an addition to the ‘A’ championship next year if they can build on this victory.

They laid the foundations for this win during the first half, when they managed to lead at half time despite playing into a stiff breeze. Gearoid Gaughan gave them an early lead with a point from 35 yards out, but Emo hit back with a free from Mick Lawlor, although he was unlucky not to be awarded a penalty as he appeared to have been fouled in the box.

Lawlor then game Emo the lead for the one and only time when he floated over a free from distance, but Slieve Bloom struck for their first goal soon after. Ben Conroy had given warning to his goal-scoring intent early in the game when he cut in along the left wing and saw his shot saved, but he made no mistake when given a second opportunity as he blasted a shot past Paddy Lalor.

Emo responded well by rattling off the next two points to draw level, but they really should have been ahead as poor shooting let them down, with Mick Lawlor guilty of some bad misses.

They were made to pay for that profligacy when Slieve Bloom found their scoring touch once again, as Ben Conroy and James Hooban fired over points before Conroy struck for his second goal.

A lovely ball floated over the Emo defence by Enda Conroy found the full-forward, and he held off Declan lawlor before forcing the ball home from close range despite the best efforts of the Emo rearguard. Mick Lawlor added a late point in the half for Emo but they still trailed 2-3 to 0-5 at the break, and Slieve Bloom would have wind advantage in the second half.

Emo made light of that by getting off to a great start in the second half, as Mick Lawlor scored twice in the opening three minute to reduce the gap to just two points. Unfortunately for Emo, they could not score again, as Slieve Bloom-Castletown dominated the scoring from there to the end.

Gearoig Gaughan scored his second of the day from long range, before Conroy added a free and then Gaughan made it a hat-trick of points.

Emo were getting more and more desperate for scores but they just couldn’t get the ball over the bar, in stark contrast to Slieve Bloom, who stretched their lead with a wonderful point from James Hooban. Emo had a late stab at salvation when they were awarded a penalty, but their miserable night in front of goal was compounded when Mick Lawlor’s effort cannoned off the crossbar.

Slieve Bloom closed out the game from there with points from Ben Conroy and James Hooban, as they secured a well deserved nine point win.