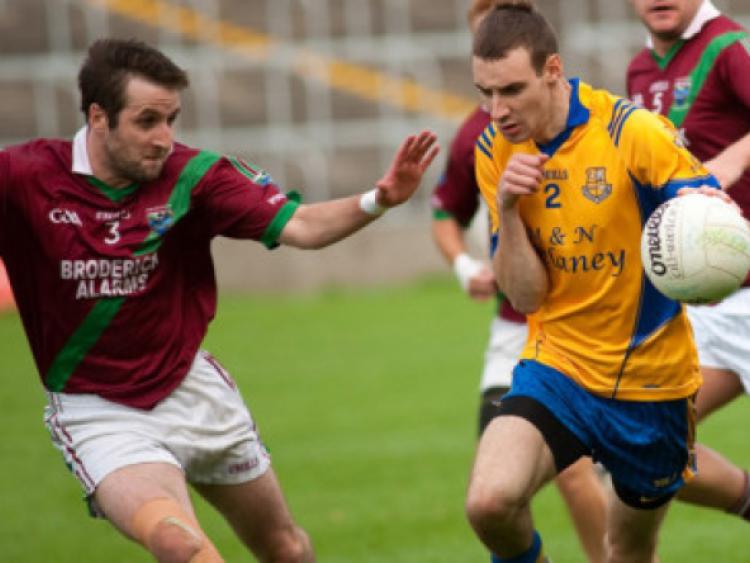 A remarkable late flurry of points from St Joseph’s midfielder Matthew Campion helped the Kellyville side to a well-deserved win over Portarlington on Sunday night.

A remarkable late flurry of points from St Joseph’s midfielder Matthew Campion helped the Kellyville side to a well-deserved win over Portarlington on Sunday night.

Campion rattled off four points in as many minutes, between the 57th and the 61st minutes, as the late rally stunned Portarlington and left them mired in the relegation dogfight.

The sides were level at 0-10 apiece when Campion struck for his quartet of scores, and a late free from James Doyle sealed the win. It ensures that St Joseph’s remain in this year’s championship, as well as securing their involvement for 2014 too.

They just about shaded what was a poor game overall, with some of the passing and tackling from both teams very disappointing. It was verging on farcical at times how often players kicked the ball directly to opposition players, with both teams guilty on multiple counts.

For Portarlington, their need for improvement is hastened by the fact that, if they lose their next game, against The Rock, they will be relegated from the SFC, and so will be looking to find form quickly.

For St Joseph’s, they have plenty of room for improvement too, as they managed just six points from play and will know that a big improvement is needed, as the standard only improves from here.

The game’s first score arrived in the third minute, with James Doyle landing a wonderful free from way out on the left wing. The lead lasted a little over a minute, however, as Portarlington responded in similar fashion through Shane McAuley, as he slotted over following a foul on David Murphy.

That set the tone for much of the first half, as the teams would be level on five different occasions. Portarlington took the lead for the first time when Stephen O’Neill made the most of being afforded some space 40 yards out, but the sides would be level again soon. Noel Garvan, lining out at full-forward provided the score with a neat swivel and point from 25 yards, before he then won a free from the next ball that was kicked in to him.

Matthew Campion made no mistake with the placed ball, and just when it looked like St Joseph’s might be getting a bit of momentum, Port were quick to respond with a long range effort from Shane McAuley, and the tit for tat scoring continued from there.

Liam Kealy edged St Joseph’s in front only for Stephen O’Neill to restore parity, and then Cathal Ryan landed a point from way out on the right wing to hand the advantage back to Port.

Something seemed to click for St Joseph’s after that, and they picked things up in the last eight minutes of the half, starting with a point from Jason Campion. The same player then added another two minutes later, as he showed good speed to create an opportunity 35 yards out, and he then supplied the finish. A free from Matthew Campion brought the scoring for the half to an end, and St Joseph’s held the advantage as they lead 0-7 to 0-5.

Port started the second half with a point from Jonny Fullam, but Matthew Campion and James Doyle both hit frees to open up a three point gap, 0-9 to 0-6, the biggest lead of the game.

Undeterred, Port hit three unanswered points to level the gam, with mcAuley, Graham Weldon and David Murphy all getting in on the act as the teams were level for the sixth time with ten minutes to go.

James Doyle (free) edged St Joseph’s in front only for Stephen O’Neill to level things up, and with the game now hanging in the balance, Matthew Campion took control. He first slotted over two frees, before than adding two more from play to stun Portarlington. James Doyle then wrapped it up with a late free.