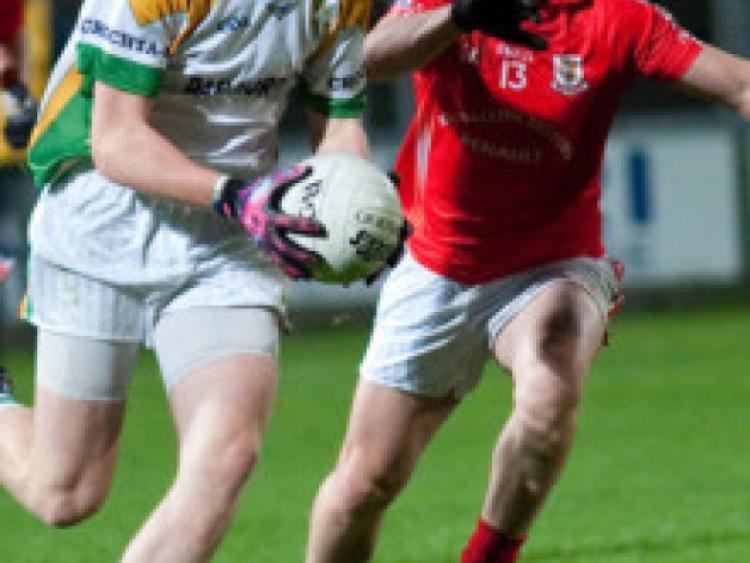 Despite leading by 12 points with 12 minutes to play, Crettyard needed a brilliant last ditch block from Liam Kelly in the final seconds of the game to hold on for the win.

Despite leading by 12 points with 12 minutes to play, Crettyard needed a brilliant last ditch block from Liam Kelly in the final seconds of the game to hold on for the win.

For 45 minutes Crettyard dominated the game and were full value for their 3-8 to 0-5 lead but with the winning line in sight, they froze allowing Timahoe back into the game.

Led by the inspirational Padraig Clancy, who was effectively playing on one leg, Timahoe clawed their way back into the game and a late goal from the penalty spot from Ruairi O’Connor got them back within three.

They had the chance to snatch a draw but Ruairi O’Connor’s goalbound shot was bravely blocked by Liam Kelly and Joseph Foyle’s instant snap shot on the rebound found the side netting. The final whistle came after that effort much to the relief of Crettyard who had just built enough of an advantage to hold off the Timahoe fightback.

Crettyard’s nervous final 15 minutes was in stark contrast to the rest of their performance which was confident and assured as they set about their task from the throw-in building a 2-4 to 0-1 lead by the 21st minute. Niall Purcell opened the scoring with a well struck free but that was cancelled out soon after by Ruairi O’Connor.

After that however it was all Crettyard for the next 16 minutes as they added 2-3 without reply. Evan O’Carroll stated the scoring run with a point and with 11 minutes on the clock Cormac Murphy reacted quickest to slot the ball to the back of the net after Ciaran Hosey’s shot came back off the post.

They almost added a second goal soon after but Roghan Headen in the Timahoe goal did well to save from James Brennan. It was only a brief respite for the ‘keeper however as after points from Ciaran Hosey and Eddie O’Reilly, Crettyard did add a second goal when Laois minor star Evan O’Carroll found the back of the net.

After 19 minutes without a score, Padraig Clancy got Timahoe’s second point after his initial shot had been blocked by Liam Kelly and he added another soon after to reduce the gap to seven. Before the break Ruairi O’Connor and Christoir Maher exchanged points which left Crettyard with a 2-5 to 0-4 advantage heading into the second-half.

They started the second 30 minutes intent on extending the gap and points from Cormac Murphy, Christoir Maher and Niall Purcell were followed by their third goal when Maher and Evan O’Carroll combined to put Ciaran Hosey through and the wing-forward made no mistake with his finish to the back of the net. All Timahoe could muster by way of a response was a point from James Whelehan.

With 49 minutes on the clock, Timahoe trailed by 3-8 to 0-5 and they looked to be dead and buried but lead by Padraig Clancy, they almost pulled off an amazing comeback. The full-forward, who was a spectator for most of the game as there was very little supply from out the field, kicked two points to start the fightback and a fine goal from Ruairi O’Connor after 51 minutes reduced the deficit to seven.

At this point Crettyard were rocking and the confidence they played with for the previous 50 minutes suddenly evaporated. Timahoe laid siege to the Crettyard goal and Padraig Clancy pointed a close range free to reduce the gap even further.

With injury-time approaching, a foul on Ciaran Lennon as a high ball dropped in resulted in a penalty for Timahoe and Ruairi O’Connor made no mistake from the spot to leave three points in it.

Two minutes into injury-time, Timahoe almost snatched a draw. A high ball in from PJ Kelly was won by Ruairi O’Connor but his close rnage shot was blocked by the sprawling Liam Kelly. The ball broke to Philip Brennan who had to shoot first time but from a narrow angle only found the side netting.