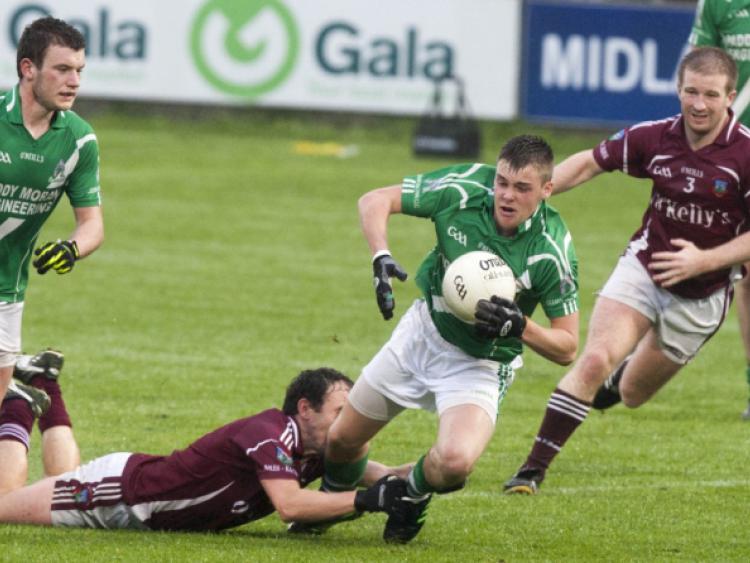 You just can’t buy experience. With ten minutes left of this end to end clash on Saturday evening, Killeshin were two points up and looked in great shape to spring a surprise.

You just can’t buy experience. With ten minutes left of this end to end clash on Saturday evening, Killeshin were two points up and looked in great shape to spring a surprise.

By the end, this wily Arles-Kilcruise side had, almost inevitably, turned the screw and chalked up another hard fought win.

While all the talk will be about the huge shock in the following game, Kilcruise will be delighted with their unspectacularly efficient progression to the winning side of the championship.

If their progress is unspectacular, their opening play was anything but. Kilcruise stormed out of the blocks and within seven minutes they had fired 1-2 without reply to leave Killeshin looking shell-shocked.

Chris Conway’s early free got the ball rolling before a clinical Arles attack saw Jason McLoughlin pick out David Conway, who raced through and finished with an unstoppable cross-goal shot low into the bottom left hand corner of Shane Coakley’s net.

Damien Lowry cut inside to convert a fine left-footed effort, then set up Eoin Lowry with a neat flick on from Gavin Brennan’s ball in. However the young forward spilled the ball on the greasy surface, but was still happy to salvage something from the move as he was able to make do with a point.

Munnelly again showed his class with his second of the game, but three points on the trot saw Killeshin draw level, with Arnie Mahon, Eoin Lowry and Damien Lowry all finding the target.

Killeshin seemed to have the momentum but true to form Kilcruise responded, aided in no small part by the introduction of influential midfielder Kevin Meaney, who notched one of Kilcruise’s four unanswered scores to leave them leading by that margin at the interval.

Ross Munnelly hit two and set up the other and his side looked in control at the break leading by 1-7 to 0-6.

However, they looked anything but that after the restart. Rory Stynes made a fine interception to deny Stephen Attride’s goal chance in the first minute, before Gavin Brennan chipped one off the lead a minute later with a curling effort that just crept in at the left post.

After seven scoreless minutes the game really sprung to life midway through the second period when Killeshin found the back of the net to make it all square.

Cathal Brennan’s neat ball was collected by Eoin Lowry and he tore past his marker, cut inside and buried a stinging drive past Jimmy McDonald.

Five minutes later, the men in green took the lead for the first time and again it was Eoin Lowry who did the damage, splitting the posts from thirty yards to twig the hopes of the large band of Killeshin supporters taking refuge from the driving rain in the main stand.

Those hopes could have been rasied even higher only for a couple of missed opportunities from scoreable positions, and as if to rub salt in the wounds, Arles Kilcruise hit back to cancel out Killeshin’s fragile advantage.

Chris Conway gathered the ball and fired over to register his side’s first score of the second half with nine minutes remaining, but they would go on to finish out all the scoring action and secure their place in the latter stages of the championship.

Ross Munnelly fired his fifth of the game before David Conway raced onto a Mick O’Shea through ball to tap over, and sub James Conway fired over a superb effort late to round off the Kilcruise win.

They now join O’Dempsey’s, Graiguecullen and the winners of Stradbally v Arles-Killeen in the quarter-finals.