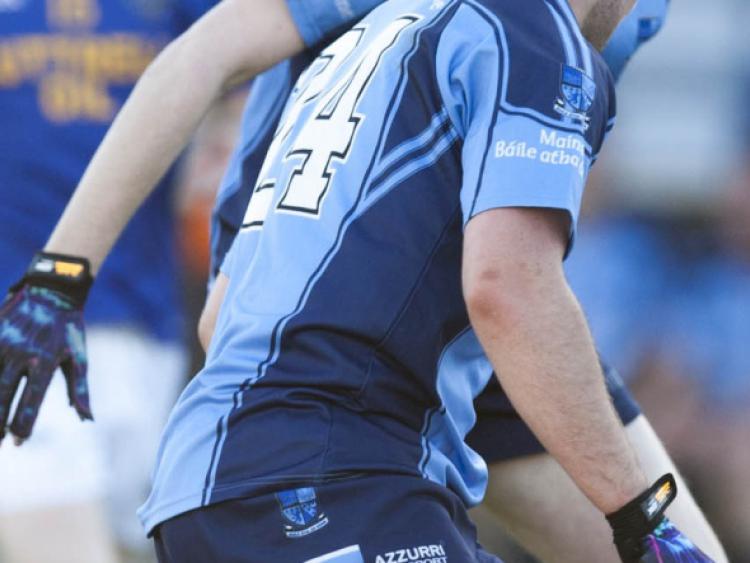 Ballyroan Abbey’s Leinster championship got off to a dramatic start in Crettyard on Sunday afternoon as they claimed an injury-time game-winning goal to send them through to the next round at the expense of Meath champions, Gaeil Colmcille.

Ballyroan Abbey’s Leinster championship got off to a dramatic start in Crettyard on Sunday afternoon as they claimed an injury-time game-winning goal to send them through to the next round at the expense of Meath champions, Gaeil Colmcille.

Eager to get their Leinster campaign off to a good start, Ballyroan Abbey drew first blood to take an early lead. With just two minutes on the clock, MJ Tierney set the scoreboard in motion with a thirty-metre free, his first of eight for the day.

The Kells based Meath champions, Gaeil Colmcille, quickly set about putting their stamp on the game. Centre-forward, Danny McGovern, levelled the proceedings after four minutes, before Seamus Mattimoe carried the ball thirty metres to split the posts and send Kells in front.

With ten minutes elapsed, Gaeil Colmcille’s Brian Hanlon put two between the sides with a short range free, before Ballyroan Abbey narrowed the gap back to the minimum with MJ Tierney converting a free after Padraig McMahon’s slicing run through the Kells defence was halted twenty-one metres from goal.

Ballyroan Abbey levelled the game within ten minutes as MJ Tierney again proved reliable with a brace of placed balls, the second of which was a huge strike from thirty-five metres on the sideline to leave the sides all square approaching the final five minutes of the half.

Unhappy to enter the dressing room on par, Gaeil Colmcille took the lead two minutes before the break with midfielder, Gary Arkins, latching onto a perfectly measured cross-field pass before raising the white flag. Ballyroan Abbey however restored parity for the final time in the half as MJ Tierney picked up his, and Ballyroan’s, fifth point of the half.

Early indications in the second half looked bleak for Ballyroan Abbey as the Meath champions took a four point lead just four minutes into the second half. Brian Hanlon (2), Stephen McManus and Seamus Mattimoe all pointing to send Kells four ahead inside four minutes with no signs of letting up.

Ballyroan Abbey steadied the ship as Padraig McMahon added his name to the scoresheet on two separate occasions, only for Danny McGover and substitute Barry Tormey to cancel out his efforts on both occasions to keep the gap at four points with a quarter of an hour remaining.

MJ Tierney kept plugging away for Ballyroan Abbey as he slotted his sixth free of the day to put three between the sides, but less than a minute later Seamus Mattimoe restored Kells’ four point cushion.

As the game entered its final ten minutes, Ballyroan Abbey came to the fore. An MJ Tierney free after fifty-two minutes closed the gap to three, before Tierney stole the spotlight three minutes later with a clinical goal to level the game with five minutes remaining.

Gaeil Colmcille’s Martin Barrett landed a sensational point after fifty-six minutes that looked like it may have sealed it, but an MJ Tierney free a minute from time levelled the game in dramatic fashion.

Right on the stroke of full-time, MJ Tierney’s last ditch effort to raise the white flag dropped short - only for Jamie Whelan to beat his marker and the oncoming keeper to get a touch and send the ball rolling over the line for the winning goal.

Scott Conroy grabbed Ballyroan an insurance point two minutes into injury-time as they held out for the win, leaving them to prepare for the winners of Kilcormac-Killoughey and Naomh Olaf in the next round.