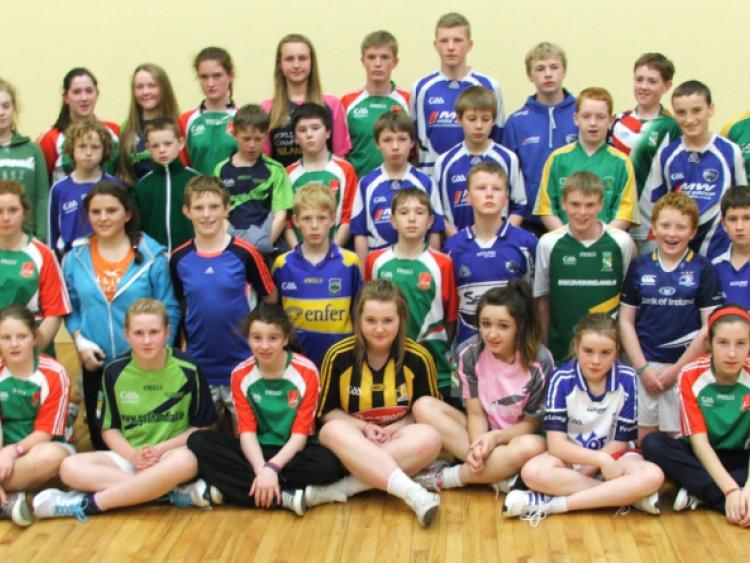 Cullohill Handball Club recently played host to the inaugural Laois juvenile One-Wall championships. The tournament proved to be an astounding success with 51 players from all over the county taking part in 68 action packed games.

Cullohill Handball Club recently played host to the inaugural Laois juvenile One-Wall championships. The tournament proved to be an astounding success with 51 players from all over the county taking part in 68 action packed games.

In the Boys U-10 section, the cup final saw Jonah Kelly face Darragh Kelly. This proved a highly entertaining affair with Jonah edging it on a scoreline of 14-10. The plate final was an even closer encounter with Luke Dunphy defeating his brother Ben by a solidarity ace 16-15.

The Boys U-12 section produced some very enjoyable and high quality games of handball.

In the cup final, Billy McEvoy played superbly to defeat Lorcan Fitzpatrick 16-7. The plate final proved to be a thriller between Josh Kelly and Thomas Walsh. Josh was to pip Thomas 13-12, scoring the decisive ace with only seconds remaining.

In the Boys U-14 section Matt Kelly took the honours when defeating Brian Brennan 19-7. Special mention must be given to Conor Mulhall who pushed Matt all the way in their semi-final and was very unlucky to lose out in a tight encounter. The plate final saw Evan Deegan defeat his cousin Rory Deegan on a scoreline of 19-11.

The Boys U-17 section provided some memorable games with a number of highly talented players in this age-bracket. In the cup final, Padraig Delaney defeated David Doheny 20-14 in an absorbing encounter full of high quality handball. The plate final was equally as compelling, with Jack McEvoy edging Eoghan Doheny 18-15. Two other players to shine in this section were Pauric Dunne and Tommy Whyte.

In the Girls U-15 section, Avril Deegan played breathtaking handball to overcome Leah Dunphy 21-6 in the cup final. The plate final was won by Rachael Delahunty who defeated Elaine Spencer 17-7. Emer Delaney also produced high quality handball in this section and was unlucky to miss out on a place in one of the finals.

The Girls U-17 section produced two of the best finals of the day. In the cup final, Maeve McNeill staged a remarkable comeback to edge Emer Dunphy on a scoreline of 16-14. The plate final followed a similar theme with Louise Walsh finishing the stronger to defeat Lauren McGuigan 19-14.

It is evident from the success of this tournament and with the popularity of the game growing within the county that Laois handball is in a healthy place right now.

Laois GAA Handball would like to thank the Cullohill Handball Club for hosting this fantastic tournament and also acknowledge the efforts of everyone involved in the organisation and running of this event.