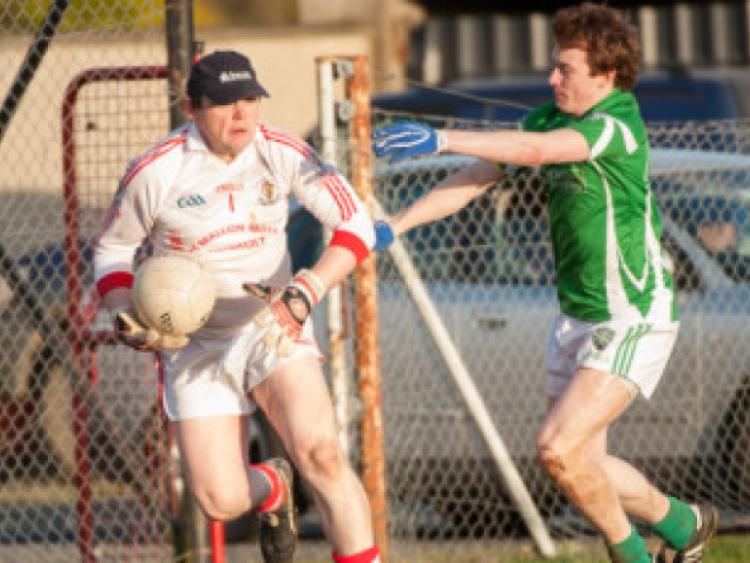 Stradbally opened their 2014 league campaign with a win over neighbours Timahoe on foreign soil on Saturday last as they emerged with two points to spare in a low-scoring but entertaining clash.

Stradbally opened their 2014 league campaign with a win over neighbours Timahoe on foreign soil on Saturday last as they emerged with two points to spare in a low-scoring but entertaining clash.

With an overcast sky hovering over Timahoe, Stradbally and Timahoe took to the field to open their league campaign for the season ahead.

Timahoe wasted no time in setting the scoreboard in motion with Pascal Foyle splitting the posts with his first opportunity of the day after less than a minute. Stradbally replied five minutes later with John Donohue grabbing his first of the day to level the proceedings.

Robbie Foyle and Podge Fitzpatrick exchanged points to keep the score even at two points apiece after ten minutes, before Timahoe went on to score the next three points on the trot. Ruairi O’Connor was on hand to grab the first with a superb dummy paving the way for him to lift the white flag, before Sean Ramsbottom and Ruairi O’Connor also added points as Timahoe stormed into the lead.

John Donohue narrowed the gap to two points with his second of the evening after eighteen minutes of play, before Ruairi O’Connor restored Timahoe’s three point cushion two minutes later.

Stradbally rallied in the final minutes of the half with a point apiece from John Donohue and Colm Kelly to see them trail by the minimum at the interval.

Stradbally restarted the scoring for the second half almost immediately with an array of points from Colm Kelly (2) and Colin Beale to see them take the lead for the first time in the game.

Timahoe leveled the proceedings thanks to a Ruairi O’Connor brace, but Stradbally edged back in front two minutes later with Colm Kelly and Cormac Delaney pushing them into the lead.

Timahoe managed to pull one back through a Sean Ramsbottom free, but Stradbally maintained their two point lead with a Colm Kelly free three minutes from time as they held on to claim their first win of the season.