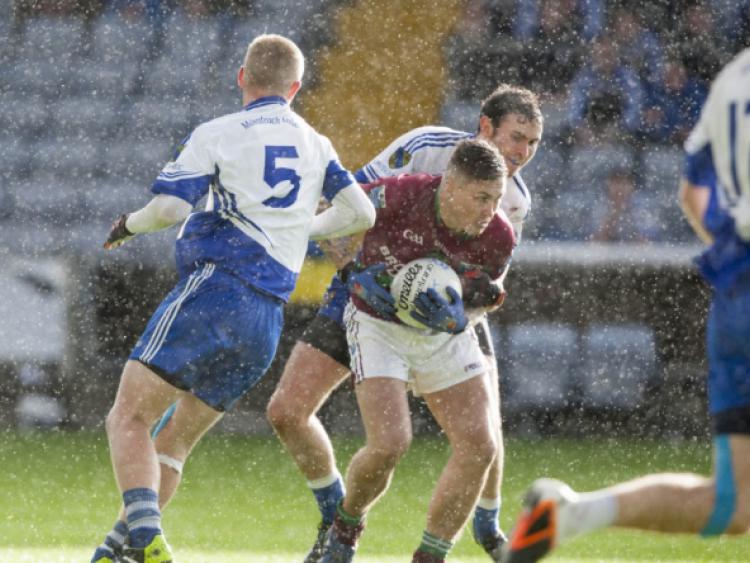 A superb second half comeback from Mountmellick saw them stun Portarlington and claim a two point win in this SFC Round 1 game on Sunday.

A superb second half comeback from Mountmellick saw them stun Portarlington and claim a two point win in this SFC Round 1 game on Sunday.

Portarlington were tipped to take this one, after a very impressive ACFL Division 1 campaign which saw them qualify for the final. For the first half of this game they kept that for going, but when Mountmellick came back at them in the second half, they had no answer.

Mountmellick, themselves waiting to play the ACFL Division 2 final, had struggled in the opening stages, but a somewhat fortuitous goal saw them transformed in the second half, and they were good value for the win.

With a very young team to boot, it will have done wonders for confidence in the setup, and between league and championship, they are now on a run of 13 wins in a row.

The goal which sparked their revival was disputed by Portarlington, as Niall Mullen got a fist to a dropping ball and sent it toward goal. Portarlington thought they had kept it out, but the umpires awarded it, and even after referee Joe Brennan consulted with them, the goal stood.

Further controversy followed when Mountmellick were awarded a penalty in the 48th minute, when goalkeeper Brian McAuley pulled down Jason Caffrey just as he was about to finish to an empty net. Incredibly, Joe Brennan issued a yellow card for that offence, but moments later, when Gearoid Hanrahan pulled down a Portarlington player in midfield, he was shown a black card.

Both offences were identical but drew different punishments, and it is inconsistency like that which can frustrate players and supporters alike.

Luckily, neither decision affected the final result, and Mountmellick now go on to face Graiguecullen. They opened the scoring here through Karl Donoher, but Adam Ryan quickly drew Portarlington level. Ryan’s next shot dropped short, but the resulting breaking ball fell to Kevin McGrath, and he fired it into the top corner.

Niall Mullen responded with a free for Mountmellick, but Port had the ball in the net again soon after. Patrick O’Sullivan’s marauding run got him on goal, and even though his initial shot was saved, he got to the rebound and rolled it to the net.

Mountmellick’s reply was impressive, as they came down the field, and Colm Coss worked the ball to Darragh Hanlon, who shot past McAuley from close range.

Portarlington took control of the game after that, playing their best football of the game. Kevin McGrath and Joseph Sweeney pointed either side of a Darragh Hanlon to effort, before Eoin Gleeson clipped over a lovely free from the left wing.

McGrath added another point before Mountmellick replied through Karl Donoher. Port would have the final say in the half, however, as David Murphy curled over a brilliant point from the right wing, and they lead by five at the break, 2-6 to 1-4.

Niall Mullen and David Murphy traded points early in the second half before Mullen got a flick to a high ball from Karl Donoher, and a goal was awarded.

The change in Mountmellick’s demeanour was telling after that, and they attacked with pace and purpose after that. Eoin George drew them within one before substitute Jason Caffrey was fouled for the penalty.

The youngster showed great maturity to tuck it away to the bottom corner, and Mountmellick had the lead they would not relinquish. Port had their chances, but Shae Conlon’s late point put the seal on Mountmellick’s win, as they had two points to spare in the end.