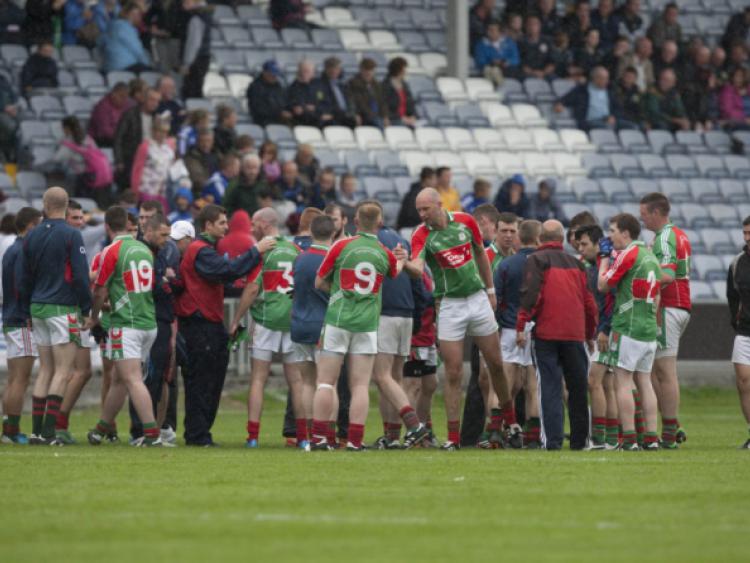 On a weekend of upsets in the Senior Football Championship, Graiguecullen made sure they were not amongst the favourites losing out with a comfortable nine point win over Crettyard.

On a weekend of upsets in the Senior Football Championship, Graiguecullen made sure they were not amongst the favourites losing out with a comfortable nine point win over Crettyard.

Seven points up at half-time, they kept Crettyard at arm’s length in the second and were never threatened as they closed out the win.

Aaron Forbes was the spearhead of the attack with a very impressive performance at full-forward while Mark Doogue had his shooting boots on kicking nine points. At the other end, Mark Timmons kept the dangerous Evan O’Carroll under control for the majority of the game while Michael Hand dominated the midfield sector winning a huge amount of clean, primary possession.

Crettyard can’t be faulted for effort and they kept plugging away throughout the game but they were simply over matched. They were kept scoreless for 21 minutes in the first-half and 19 in the second and their bad day was compounded late on when they were reduced to 14 men when Niall Purcell was dismissed after receiving a second yellow card.

Crettyard started the first-half strongly and could have been four points ahead inside two minutes but Patrick Brennan rattled the crossbar with a powerful strike after Cormac Murphy had put over the opening point from a free.

It took Graiguecullen a few minutes to get into their stride but once they did, they took control of the game. Defending in numbers and attacking swiftly on the break, they rattled over the next four points, two from Mark Doogue and one apiece for Danny Alsybury and Trevor Collins.

Further points from Lee Murphy and two from Mark Doogue put nine between the sides and Graiguecullen looked to be out of sight with 20 minutes on the clock.

While they were on the back foot for much of the game, but they threw themselves a lifeline with a point from Mark Lyons followed instantly by a determined individual goal from Philip Brennan.

That got them back within five but Graiguecullen finished the half strongly with points from Lee Timmons and Mark Doogue to put them 1-9 to 1-2 ahead at the break.

The lead increased early in the second-half with Mark Doogue and Lee Timmons pointing for Graiguecullen but Crettyard again showed they weren’t going down without a fight with Cristior Maher pointing before Evan O’Carroll found the back of the net. It was the only time in the game O’Carroll escaped the clutches of Mark Timmons and he took advantage putting a scrambled effort past Patrick Scully.

Aaron Forbes thought he had his second goal soon after but his close range fisted effort was ruled out for a square ball. Crettyard got back within four with a point from a free from Cormac Murphy but that was a close as they got as Graiguecullen rattled off the next five points to build a 1-16 to 2-4 lead with 11 minutes to go.

With the game effectively over and the storm clouds rolling in, the pace of the game dropped dramatically.

After 19 minutes without a score for his side, Crettyard’s Cormac Murphy kicked what turned out to be the last score of the game five minutes from time. In the closing minutes Crettyard were reduced to 14 men when Niall Purcell received a second yellow card after an off the ball incident with Mark Doogue who also picked up a yellow card.