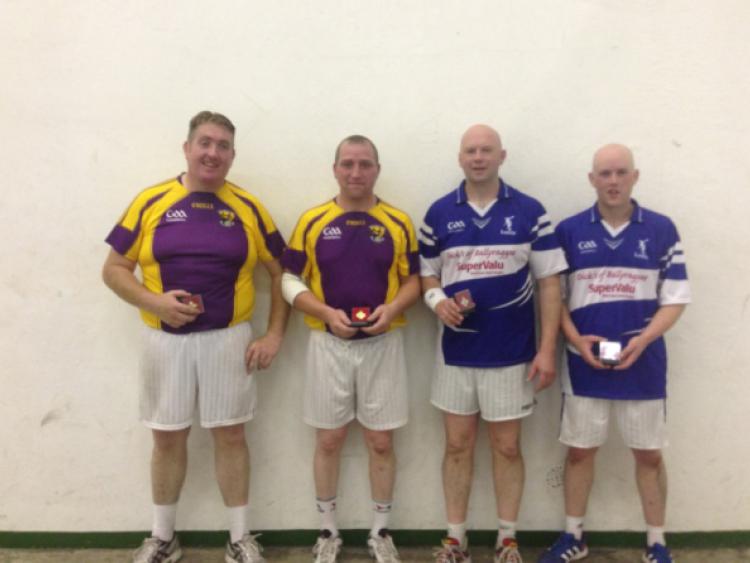 There was disappointment for Tómas Lennon and Ray Fogarty last week when they were defeated in the Leinster Junior B 60x30 doubles final.

There was disappointment for Tómas Lennon and Ray Fogarty last week when they were defeated in the Leinster Junior B 60x30 doubles final.

Facing a strong Wexford partnership in Miley Connors and Michael Goggins, the Laois pairing knew they would have to be at the top of their game if they were going to overcome the highly fancied Wexford handballers.

Lennon and Fogarty were to make a positive start to the final playing with a real sense of determination and purpose.

The Wexford pairing struggled to deal with the power of the two Laois men who were dominating the front of the court and not allowing their opponents to gain any foothold in the game.

Fogarty’s serving was also causing Connors serious problems and he struggled to return the ball with any great purchase. This provided the Laois handballers with a number of kill shot opportunities which they took with great aplomb.

Such was the dominance of the Laois pairing that they were able to build up a handsome 17-7 ace lead. Their Wexford counterparts were clearly rattled and despite their best efforts they were unable to make any inroads into the Laois lead.

Lennon and Fogarty never relented and finished off the first game in great style taking it on a scoreline of 21-11.

The Laois pairing expected their Wexford counterparts to mount a strong challenge at the start of the second game and this proved to be the case. Each ace was hard won and there was little to choose between both pairings.

With the score tied at 10 aces each it appeared to those in attendance that this game would go right down to the wire. However the Laois pairing were beginning to fatigue and started to make a number of uncharacteristic errors that allowed Wexford pull clear and gain a lead that they would never relinquish.

Connors and Goggins successfully served out the game winning it on a scoreline of 21-10 and bringing the final to a tie-breaker.

The tie-breaker was to prove a one-sided affair with Connors and Goggins dominating proceedings. Lennon and Fogarty who had battled so bravely for such long periods in the final were unfortunately unable to muster a response.

With the momentum now firmly behind them the Wexford pairing went on the take the Leinster title by winning the tie-breaker 21-2.

This is the second year running that Laois have lost out in the Leinster Junior B 60x30 doubles final.

Hopefully come next year’s championship it will be third time lucky and Laois will be able to capture the elusive Leinster title at this grade.