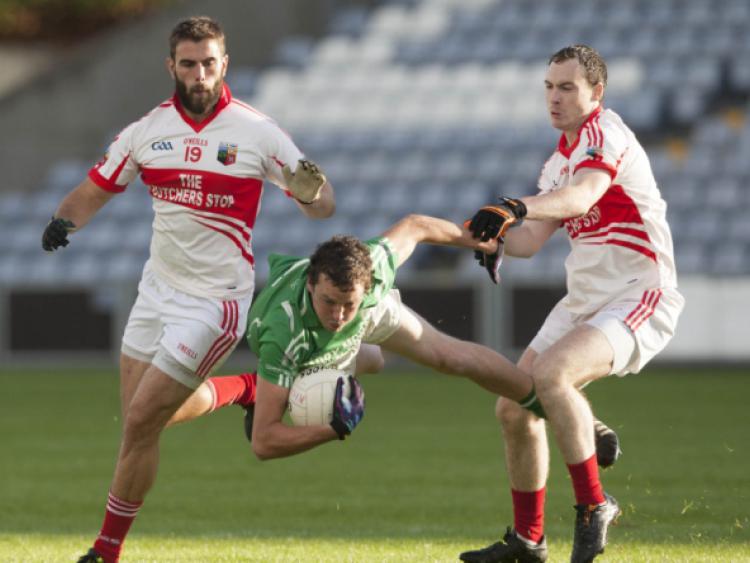 An injury time penalty from Darren Strong settled this pulsating, and controversial, SFC opener in O’Moore Park on Sunday night, as the curtain came down on Round 1 in spectacular fashion.

An injury time penalty from Darren Strong settled this pulsating, and controversial, SFC opener in O’Moore Park on Sunday night, as the curtain came down on Round 1 in spectacular fashion.

For the most part, this had been a thoroughly uninspiring game, with the first in particular passing by without any real intensity.

The second half ambled along in much the same vein until it exploded into life in the last ten minutes, during which time Killeshin took the lead twice only to be pegged back both times.

Things really kicked off in injury time, with David McDermott hauling down Evan Costello in the penalty area when Killeshin lead by two points.

Darren Strong placed it perfectly into the bottom corner and then all hell broke loose. Killeshin tried to take a quick kickout, and Emo tried to stop the play dead in midfield. A row broke out, with players and mentors streaming in, and when calm was restored, Paul Lawlor was sent off on a second yellow card, and Evan Costello and Simon Attride were yellow carded.

Killeshin then set out on a mad dash for an equaliser, but Emo forced a turnover and Maurice Deegan blew the full-time whistle.

That wasn’t the end of it either, as Deegan was subjected to a tirade of abuse leaving the field from Killeshin supporters, and it remains to be seen if there will be any action for what happened after the final whistle.

Killeshin may have felt there should have been more time played, or perhaps they felt they should have had a free in the build up to Emo’s second goal,but certainly both penalties were the correct decision, and they mustn’t dwell on the result here as they have avery difficult game against St Joseph’s coming up in the qualifying round.

They had done most of the early running here too, pushing out to a 0-3 to 0-1 lead after seven minutes, with Damien Lowry getting the pick of the scores with a fine long-range effort.

Stephen Attride, very impressive throughout the game here, sent them further ahead with his first point from play, with Evan Costello responding for Emo with a free. Killeshin were pushing on though, and a Cathal Brennan free sent them three ahead again.

Emo were struggling to get anything going in attack, and it was Evan Costello who dragged them back into the game, as he tapped over a couple of frees before landing his first effort from play

That saw the teams level, but Killeshin re-took control of the game after that, starting with a point from Eoin Lowry. Damien Lowry added another, Eoin Lowry saw a goal effort saved on the line by Robert Wilkinson, and Stephen Attride and Cathal Brennan both hit the target to see Killeshin lead 0-9 to 0-5 at half time.

Evan Costello (free) and Stephen Attride traded points early in the second half, but it was Emo who were dominating possession and just couldn’t score. That changed in the 40th minute, when sub Mick Lawlor was through on goal, but Shane Coakley foot-blocked his effort, and a penalty was awarded.

Darren Strong held his nerve to stroke it home, but Killeshin hit back with a point from Cathal Brennan. Emo would draw level, however, only for Barry Ryan to point twice to give Killeshin the lead.

As it turned out, it was a dangerous lead, as Emo’s second penalty, awarded for a foul on Evan Costello as he raced through on goal, and under intense pressure, Darren Strong made no mistake to get the crucial score for his side.