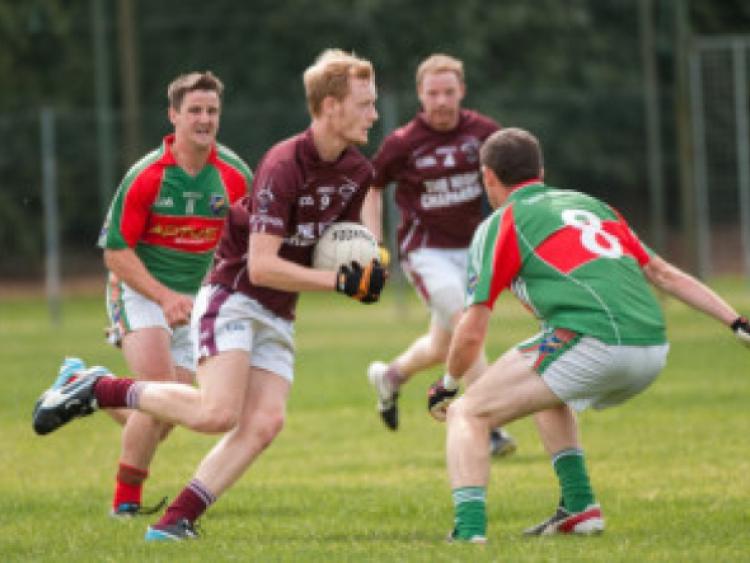 In a one-sided affair in Stradbally on Sunday morning, Spink ran riot as they chalked up an impressive fifteen point victory over an overwhelmed Kilcavan side.

In a one-sided affair in Stradbally on Sunday morning, Spink ran riot as they chalked up an impressive fifteen point victory over an overwhelmed Kilcavan side.

Spink started the game well with three early points from Daithi Brennan before Kilcavan could register their first point of the day, and also their last of the half, after nine minutes. In the meantime however, Kilcavan were aided their new-found numerical advantage following Cha Dwyer’s dismissal after eight minutes for two yellows inside two minutes.

Despite being a man down, Spink heaped pressure on the Kilcavan defence resulting in a brace from Damien Carter. Things went from bad to worse for Kilcavan as their numerical advantage lasted a mere nine minutes as, like Dwyer, Patrick Hunt was given his marching orders for two yellow cards.

Daithi Brennan continued to cause trouble for Kilcavan with his fourth point of the day, while Micheal Downey raised the white flag too as Spink took a six point lead. Damien Carter went on to notch 1-2 in the final seven minutes before the interval, and Sean Downey pitched in with a point, to see Spink lead by 1-10 to 0-1 at the interval.

Early points Daithi Brennan and Paul Simms kick-started the second half to push the spink lead out to fourteen points, before Kilcavan claimed their first point in twenty-five minutes through Mick Bermingham.

Seamus Dwyer got his name on the scoresheet with a well-taken point before Brennan added his sixth point of the day as Spink continued to pull away from their opposition. The final nail in the coffin came shortly after as Paul Simms claimed Spink’s second goal of the game. Spotting Eamon O’Brien off his goal-line, Simms perfectly weighted his shot over the head of the oncoming O’Brien and into the back of the net to put the result beyond all doubt.

Kilcavan fought back in the final minutes with two consolation points from Derek O’Connell, but it was too little too late as Spink ran out comfortable fifteen point victors on the day.