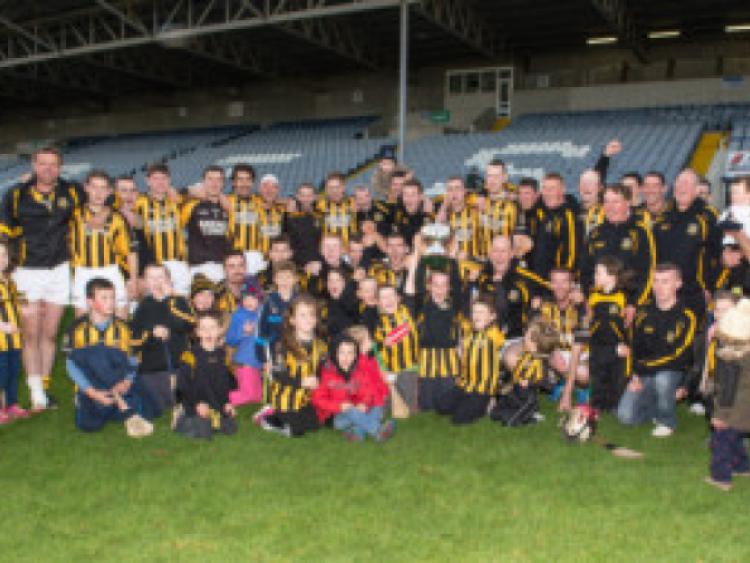 Camross claimed the Laois JHC ‘A’ title on Saturday afternoon, as they withheld a second half comeback from Kyle to run out three-point winners.

Camross claimed the Laois JHC ‘A’ title on Saturday afternoon, as they withheld a second half comeback from Kyle to run out three-point winners.

Their final task was made easier as Kyle lost their discipline in the closing stages, seeing both Eamonn Fletcher and Conor Quinaln dismissed as their slim hopes of victory evaporated.

The game was dominated by a strong wind which blew directly down towards the town end, with Camross having it at their backs in the first half and opening up a six point lead by the break.

In truth, they should have been out of sight by then, as they hit 12 wides in the first half as well, with the elements as much of a hindrance as it was a help.

They managed just four points in the second half, but they had given themselves enough of a cushion to get home without too much fuss.

Crucially, they never allowed any goals, and credit there must go to the full-back line. Pakie Cuddy was at his brilliant best, sweeping up ball after ball in the Camross defence. Lorcan Burke in front of him played well too, while captain David Mortimer played his part, scoring 0-7 and getting involved in most of their good play.

For Kyle, it is an achievment in itself getting to a final with the resources at their disposal, and they will just have to regroup and try to come back next year. It’s not beyond them, but discipline will have to be improved for 2015.

Camross had jumped out to an early lead, as a couple of early missed chances finally gave way to Paul Kavanagh’s opening score in the fifth minute.

The only goal of the game arrived three minutes later, and it is one Kyle will want to forget. Lorcan Burke fired a long ball forward from the Camross half-back line, and it flew all the way to the net, deceiving Eoin Kennedy in the Kyle goal.

Kyle finally opened their account after that through Eoin Quinlan, but Ollie Dowling was quick ro restore Camross’ four point lead with a score moments later.

Adrian Kelly pointed his first free of the day for Kyle midway through the half, but Camross were in command, and Dan Lalor fired over soon after from 21 yards.

David Mortimer got the first of his seven frees in the 18th minute, but Kyle were gradually finding form, and Mark Teehan’s excellent point under pressure kept them within striking distance.

Camross made their most significant play for victory over the next five minutes however, as David Mortimer rattled off three unanswered points from frees to put his side seven ahead.

Kyle managed just one in reply before half time, from Kevin O’Grady, leaving Camross 1-7 to 0-4 to the good.

Kyle made an industrious start to the second half, as Adrian Kelly pointed two frees in five minutes to chip away at the Camross lead. As would become a feature of the half, however, when Kyle got close, Camross came up with a big score, as Mortimer pointed a free to break the Kyle momentum.

Again Kyle hit back with a couple of points, but good work from Mortimer down the right wing allowed him to set up Paul Kavanagh, and he obliged by sending the ball over the bar.

Another exchange of points kept four in it, but with five minutes to go Eamonn Fletcher was shown a second yellow card to all but end Kyle’s chances of a comeback. Conor Quinlan followed him soon after, as a couple of late Adrian Kelly frees added a better look to the scoreboard.